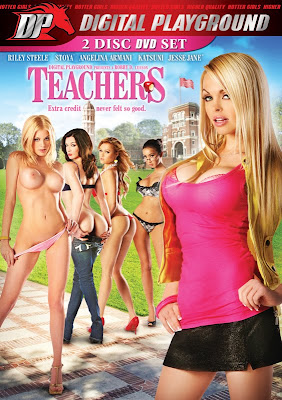 In their 1st Layout Together, Jesse Jane & Riley Steele Capture the Heat from their Acclaimed Scenes in Digital Playground’s “Teachers”!

December 8, 2009 --- VAN NUYS, Calif. --- Exclusive Digital Playground contract girls Jesse Jane® and Riley Steele™ grace the February cover of CLUB magazine. The scintillating issue goes on sale December 8 and features the first published layout with the sexy blondes together. Within the pages of CLUB, superstars Jesse Jane and Riley Steele capture the passion and heat from their acclaimed scenes in Digital Playground’s bestselling movie “Teachers”. Dan Davis, Editor-in-Chief of Magna Publishing Group says, “Digital Playground's gorgeous duo of Jesse Jane and Riley Steele was a natural for CLUB. The entire staff here collectively fell in love with the cover, as well as the amazing girl / girl layout the girls shot for us. This, coupled with the exclusive and extensive ‘Teachers’ on-the-set report in the issue, will make the February 2010 CLUB one of the year's best sellers for sure.”

To view and download the February 2010 cover of CLUB with Jesse Jane and Riley Steele, visit
http://www.digitalplayground.com/press/releases/Club%202-10%20Cover.pdf

View the “Teachers” trailer at www.digitalplayground.com/mov/teachers.html

Joone, Digital Playground’s founder says, “The chemistry between Jesse and Riley is undeniable. Through their movie scenes, photo shoots and live appearances, the girls capture the essence of being a star.”

Jesse Jane exclaims, “I love Riley and am so happy we are able to share the cover of CLUB.” Riley Steele adds, “I’ve dreamed of being on a cover with Jesse since the moment I first met her at the ‘Pirates” signing in San Diego. I can’t stop looking at our layout. It’s so hot!”

About Jesse Jane:
A superstar in her own right, Jesse Jane® is an all-American blond, green eyed, sultry girl originally from Ft. Worth, TX. In three short years she ascended from Hooters® manager to Hawaiian Tropic® pageant winner to international fame with a Digital Playground contract. All of the exposure Jesse has received in various media outlets has contributed to her success but it was her leading role in Digital Playground’s benchmark film, “Pirates” that made Jesse Jane a household name. For more information visit www.JesseJane.com , www.Twitter.com/JesseJane or www.tinyurl.com/jessejanebio

About Riley Steele:
Riley Steele™ is a beautiful, blonde force to be reckoned with. Riley is bubbly, excited, enthusiastic, and full of life. Born and raised in San Diego, California, Riley spent her days either on the beach or in an ice rink practicing her love of figure skating. Her dedication paid off, resulting in a toned and conditioned body. Riley’s ultimate dream was to follow the footsteps of idol Jesse Jane® and become an internationally acclaimed sex symbol. With fresh ink on an exclusive contract, Riley Steele had the pleasure of meeting Jesse Jane on the set of the blockbuster "Pirates II: Stagnetti’s Revenge", where they were co-stars. With Digital Playground behind her all the way, Riley launched her career at the very top. Riley wakes up every day with stars still in her eyes. Don’t tell Riley Steele dreams don’t come true! For more information on Riley, visit www.RileySteele.com , www.Twitter.com/RileySteele or http://tinyurl.com/rileybio

About CLUB:
Club is a nationally distributed magazine from Magna Publishing Group. Club is legendary as the publication that's been home to the hottest sex megastars in the world and it's a magazine of superlatives: the prettiest girls, the hottest action, and the highest quality. Club has been turning America on since 1975. Visit them at www.ClubGirlsXXX.com , www.myspace.com/ClubMagazine , www.ClubOnlineLive.com , or purchase single issues and subscriptions at www.ClubMagSub.com .

About Digital Playground:
Digital Playground is the world leader in adult filmmaking and interactive formats boasting the largest HD library available. Since the Company’s inception in 1993, Digital Playground has earned nearly 300 awards, currently garners more than 80% of high definition sales within the adult market, and is a leading provider of Blu-ray™ titles, with over 25% of the market. Female owned and operated, Digital Playground emphasizes quality first, employing fastidiously high production values in erotic film for women, men and couples. Digital Playground’s commitment to excellence, innovative technology, brilliant full-length productions and exclusive Contract Stars are the secrets to its success and makes Digital Playground the most highly demanded supplier of content for hotel, IPTV, cable, pay-per-view and mobile networks worldwide. For more information, visit www.digitalplayground.com , www.myspace.com/digitalplayground , or www.twitter.com/dpxxx