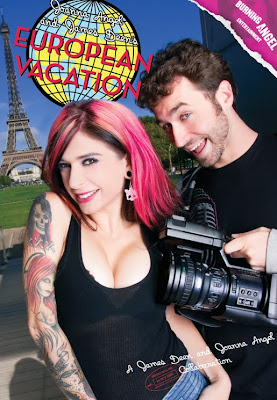 Purportedly the duo’s actual lost vacation tapes, the action begins before these two award-winning superstars even leave the States, with Joanna whipping herself up into a masturbatory frenzy while riding to the airport. And the filthy frolic continues soon after they arrive in France, as she and James steal away for some passionate public sex just a stone’s throw away from the Eiffel Tower. This intimate sequence quickly emerges as one of the finest in the movie, communicating a real sense of urgency and expectation as the two contend with the very real possibility of unwary Parisians stumbling upon their heated outdoor sexing, which they film completely on their own.

Unfortunately, their passports and travelers’ checks are mysteriously stolen during these throes of passion, along with the “ten million dollars” Joanna claims she happened to be carrying, so our dynamic duo have to turn to some rather extreme forms of entrepreneurial desperation to fund the balance of their journey – and their trip home. Naturally, the first money-making endeavor that comes to mind involves pimping James out to the city’s lovely women, and against all odds, it’s an experiment that quickly yields hot X-rated dividends.

Their first customer is tatted-up Euro-vixen Holly D., and she strikes up an instant chemistry with Deen, despite the fact that he keeps trying to speak to her in Spanish. She blows him wetly under the shadow of the Eiffel Tower before seducing him in an exciting and very public outdoor tryst while Joanna performs camera duties.

Back in their hotel room, James expresses guilt and remorse over having indulged in a tango for cash; fortunately Joanna wastes no time in calming his nerves with a brisk mercy screw. But the action takes a decidedly unexpected turn in the next encounter, as prospective clients Lucky Fortune and Skin turn out to be much more interested in each other than James; their languid lesbian encounter features some choice close-ups that show off their inked-up physiques to lewd effect.

No sooner are Skin and Lucky shown the door than Holly returns, this time with her boyfriend in tow, looking to enjoy some more of that Deen loving. The two studs take turns working Holly’s plush body over from every conceivable angle in an epic three-way that emerges as quite possibly the movie’s hottest sequence. It’s all captured beautifully here thanks to some great camerawork by Joanna.

A lighthearted stroll to find a restaurant leads to a chance encounter with famed European woodman Steve Holmes, who introduces Joanna to his friend Cecilia Vega. Deen takes over the camera as Holmes pays handsomely to watch Joanna make love to the tawny brunette, and he gets more than his money’s worth as these ladies tear into each other’s nether regions with an almost palpable sense of urgency. Steve quickly works his way into the action, and soon James joins in as well, making for a four-way that brings this vacation to a fittingly filthy end.

Are these really James and Joanna’s lost vacation tapes? You decide!