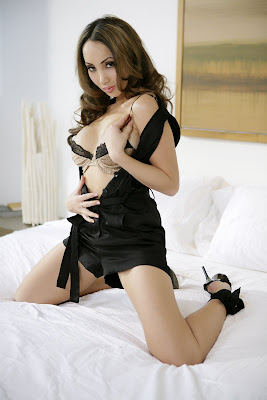 Katsuni Continues to Receive Numerous Industry Accolades, Including Her AVN Web Starlet of the Year Nomination!

December 16, 2009 --- VAN NUYS, Calif. --- Katsuni, exclusive Digital Playground contract girl and adult entertainment superstar is honored on Dr. Jays list of Must-See Girls of 2010. The Asian breath-taker has already established a strong media presence in France, and is now taking America by storm with her acclaimed roles in “Nurses” and “Teachers” and winning two trophies at the Hot d'Or Awards for Best French Actress in “Pirates II: Stagnetti's Revenge” and Best Adult Blog. “Katsuni has been one of my favorite performers for years,” Dr. Jay of XCritic.com says. “She's classy yet very passionate, and some would say, edgy. In 2009, she continued to demonstrate these attributes. But, to clinch her 2010 Must-See status, she demonstrated absolutely superb acting performances...especially in 'Nurses', one of the best movies of the year.”

Digital Playground continues to produce superior quality films, while featuring some of the hottest girls in the industry. Past winners include Jesse Jane® and Teagan Presley in 2007; Shay Jordan in 2008 and Stoya™ in 2009. “No studio has a higher number of current—or former—contract girls who have won Must-See Awards than Digital Playground” says Dr. Jay. “It seems like Digital Playground girls definitely rise to the top!”

Katsuni has also been nominated for AVN's web starlet of the year for 2010. The awards show is slated for January 9th, 2010 at The Palms Casino in Las Vegas. With more than 300 movies, 12 AVN awards, and 29 international awards under her belt, it would be no surprise if she takes home the award at this years ceremony.

To view the trailer for “Nurses”, visit www.digitalplayground.com/mov/nurses.html


About Katsuni:
This French and Asian-fused beauty has taken the world by storm with her gorgeous face, kick-ass body and amazing drive. In two short years Katsuni has transformed from go-go dancer, to exotic entertainer, to Penthouse cover girl, and now to Digital Playground contract star. Boasting a strong media presence in France, Katsuni was chosen by MCM to star in a 5-episode documentary about her life and career. Almost simultaneously, Genesis magazine named her one of the “Ten Most Popular Porn Stars in America.” To date, Katsuni has graced numerous domestic and international magazine covers and has received more than 20 international awards for her on-camera performances. She appears weekly on French television channel TPS Star’s highly-rated entertainment show, “En Attendant Minuit,” and is currently writing a memoir. For more information on Katsuni, visit www.club-katsuni.com, www.twitter.com/katsuni or view her filmography at http://tiny.cc/KatsuniBio

About Digital Playground:
Digital Playground is the world leader in adult filmmaking and interactive formats boasting the largest HD library available. Since the Company’s inception in 1993, Digital Playground has earned over 300 awards, currently garners more than 80% of high definition sales within the adult market, and is a leading provider of Blu-ray™ titles, with over 25% of the market. Female owned and operated, Digital Playground emphasizes quality first, employing fastidiously high production values in erotic film for women, men and couples. Digital Playground’s commitment to excellence, innovative technology, brilliant full-length productions and exclusive Contract Stars are the secrets to its success and makes Digital Playground the most highly demanded supplier of content for hotel, IPTV, cable, pay-per-view and mobile networks worldwide. For more information, visit www.digitalplayground.com, www.myspace.com/digitalplayground, or www.twitter.com/dpxxx.