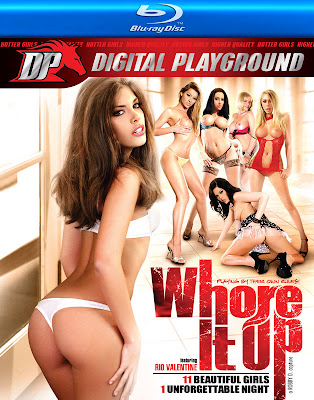 Featuring 11 Beautiful Girls and 1 Unforgettable Night Under the Command of Rio Valentine™!

View the “Whore It Up” DVD trailer at http://www.digitalplayground.com/mov/whoreitup.html

View the “Whore It Up” Blu-ray trailer at http://www.digitalplayground.com/mov/whoreitupbd.html

Digital Playground’s founder Joone says, “We had a winning combination giving Robby full reign over an endless supply of rising stars. ‘Whore It Up’ provides viewers with an introduction to many of the hottest new girls in the industry.”

“Whore It Up” on DVD and Blu-ray includes a photo gallery, chapter index, behind-the-scenes featurette, and trailers to hit Digital Playground films. “Whore It Up” is presented in 16:9 widescreen format with 5.1 digital surround sound and no regional coding.

To download the Blu-ray box cover for “Whore It Up”, visit http://www.digitalplayground.com/mailings/WhoreItUp/WhoreItUp_BD_fc.jpg

About Blu-ray™:
Blu-ray, also known as Blu-ray Disc (BD), is the name of a next-generation optical disc format developed by the Blu-ray Disc Association, and is supported by more than 170 of the world’s leading consumer electronics, personal computer and media manufacturers, video game and music companies, and major movie studios. The format was developed to enable recording, rewriting and playback of high-definition video, as well as storing large amounts of data. For more information, visit www.blu-ray.com.

About Digital Playground:
Digital Playground is the world leader in adult filmmaking and interactive formats boasting the largest HD library available. Since the Company’s inception in 1993, Digital Playground has earned over 300 awards, currently garners more than 80% of high definition sales within the adult market, and is a leading provider of Blu-ray™ titles, with over 25% of the market. Female owned and operated, Digital Playground emphasizes quality first, employing fastidiously high production values in erotic film for women, men and couples. Digital Playground’s commitment to excellence, innovative technology, brilliant full-length productions and exclusive Contract Stars are the secrets to its success and makes Digital Playground the most highly demanded supplier of content for hotel, IPTV, cable, pay-per-view and mobile networks worldwide. For more information visit www.digitalplayground.com, www.myspace.com/digitalplayground, or www.twitter.com/dpxxx.