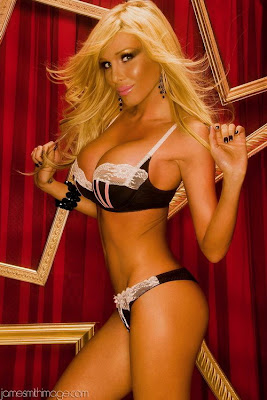 (Hollywood, CA) Sexy Adult Entertainment starlet, Kimber James (http://ts-kimberjames.com/) is currently showcased in Adult Video News magazine as a “Cybersiren.” Kimber, who can be seen on her popular website TS-KimberJames.com, has made a name for self with a glam, sexy, sophisticated look coupled with a ferocious sexual appetite. The 5’3 beauty is larger than life and continues to expand her horizons and break new ground. The December issue features a sexy fold out of a topless James with vital stats and short bio of the blond vixen.

“It’s always a great feeling when a publication features you, even more so when it’s done by a well respected one like AVN,” said James. “I’m really happy how it turned out and the consistent support of AVN.”

Recently announced are the nominees of the 2010 AVN Awards, of which Kimber has been nominated for Transsexual Performer of the Year. James has been making a presence in the media since she first started in adult entertainment and has quickly become one of the most recognized names in the genre. With an incredible body of work, it’s only natural that the prolific performer attains a nom. The annual award show takes place in January at the Palms Casino's Pearl Theater. More information on the event can be found on the show’s official website, avnawards.avn.com.

Kimber James is a launching a media takeover! With an award nomination, AVN’s Cybersiren and an explosive new DVD about to hit, expect James to warm up the winter!