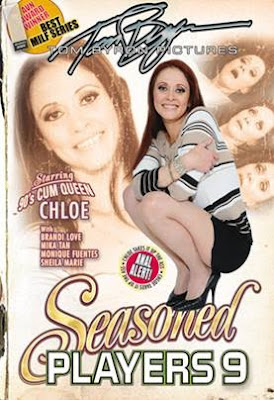 Since 2006, AEBN has recognized the most popular films and stars of the year, as chosen by the viewing habits of the millions of fans who visit the company's global network of theaters, through the VOD Awards. Nominations are based on minute sales in the theaters in one calendar year, decided upon with a precise, in-house accounting system.

“This means this is our top-selling movie on AEBN this year, a feat we’re super proud of,” says producer/director/star Tom Byron. “This nomination means our fans love our studio – and love that Chloe’s back!”

Winners will be announced within a few weeks. “In the meantime, check out the trailer,” adds Tom.

Seasoned Players 9 also stars Brandi Love, Monique Fuentes, Mika Tan and Sheila Marie – all gorgeous gals who may be older than most nymphettes, but they’re seasoned professionals who know how to work a c*ck like a teen!