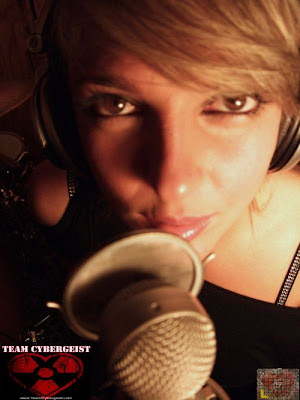 (Hollywood, CA) Lexi Love (http://lexilove.com/) has starred in over 300 Adult DVDs and internet scenes. While the Boston native may have just about done it all on-screen, the beautiful babe is always up for trying something new. Just launched on iTunes is Love’s latest venture, tackling mainstream music. Lexi teamed up with Team Cybergeist, a side project of Angel Bartolotta, who has or continues to play drums for bands such as Dope, Genitorturers, PIG, Crossbreed, Switched, The Undead, and Rikets. The song is called “On Broken Wings” and is part of the How To Destroy Something Beautiful CD.

“When Angel asked me to be part of this project I jumped on it like I hadn’t had a hard cock in months,” said Love. “Music has always been a large part of my life, I’ve been singing since I was 5 years old.”

The project was used a unique for of recording: "Each contribution was sent to Angel electronically. Angel and I wrote the song on IM, then I recorded my track in the bathroom though my laptop speakers and sent him a wave file." Lexi noted.

In other Lexi Love news, it was recently announced that Lexi had received three 2010 Adult video News Award nominations! Known for electrifying performances that leave viewers breathless, Love has been recognized for her work by AVN and is overwhelmingly excited. “To be nominated for the AVN Awards is a something to be very appreciative of,” said Love. “It means that the work you have been doing is being recognized and that is very special.” Love was nominated for Best All-Girl Group Sex Scene, Most Outrageous Sex Scene and Best Oral Sex Scene. The awards take place in Las Vegas at the Palms Casino on January 9th.

Love’s busy schedule isn’t slowing down one bit as the “Hardcore Hottie” is set to make an appearance this week at the Lone Star Pornutopia event. Kicking off on December 9th in Houston, the multi-day event is set to rock the Texas town. More information about the schedule of events and how to purchase tickets can be found on the show’s website, QuestParty.com. Lexi will be on hand to meet fans, sign her latest hit DVDs and pose for pictures.


Lexi Love is finishing 2009 with a bang! With the ultra-sexy star poised and ready for her takeover of 2010, keep your eye on Love!