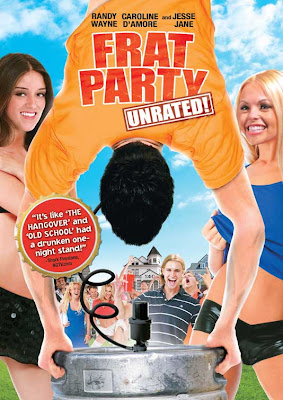 December 7, 2009 --- VAN NUYS, Calif. --- The screwball mainstream comedy “Frat Party”, starring adult performer Jesse Jane®, is now available on DVD from Anchor Bay Entertainment. Appearing as herself, the sexy Digital Playground contract girl adorns the cover of the movie depicting the party to end all parties. When a group of frat boys want to talk one of their brothers out of getting married, they throw a party and enlist the aid of dream girl Jesse Jane and her powers of seduction. Robert Bennett, the writer / director / producer of “Frat Party” says, “We loved working with Jesse Jane. She is iconic and a great talent. When casting her, we felt that Jesse has solidified a position as the top adult star in the world, and thus embodies the fantasies of all fraternity brothers on college campuses everywhere.”


“‘Frat Party’ was such a fun movie to make,” says Jesse Jane. “Everyone was super nice and hysterical to work with. I had a great time and really enjoyed getting to shoot for Robert Bennett. Hopefully there will be a sequel!”

In addition to her role in the movie, Jesse Jane is featured in a bonus feature video titled, “Get to Know Jesse”. Jesse and the cast goof around in between takes and allow viewers an up close and personal look at them.

While Jesse was shooting “Frat Party”, adult media source XFANZ.com visited the set and shot their own behind-the-scenes videos of the movie. To view the video of Jesse Jane showing XFANZ around the movie set, visit http://xfanz.com/videoBin.php?clip=2554&lv=1

Shark Firestone of NGTV.com writes of “Frat Party”, “It’s like ‘The Hangover’ and ‘Old School’ had a drunken one-night stand!” MrSkin.com calls the movie a “raucous collegiate sex comedy,” which is a “wild bash of bare babes.”

About Jesse Jane:
A superstar in her own right, Jesse Jane® is an all-American blond, green eyed, sultry girl originally from Ft. Worth, TX. In three short years she ascended from Hooters® manager to Hawaiian Tropic® pageant winner to international fame with a Digital Playground contract. All of the exposure Jesse has received in various media outlets has contributed to her success but it was her leading role in Digital Playground’s benchmark film, “Pirates” that made Jesse Jane a household name. For more information visit www.JesseJane.com , www.Twitter.com/JesseJane or www.tinyurl.com/jessejanebio