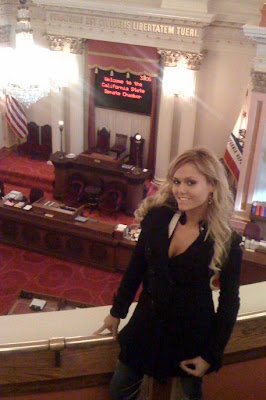 (Hollywood, CA) Angelina Armani (http://www.myspace.com/angelinaarmani) has come a long way since she launched her adult entertainment career. From starting off as a gonzo girl, to becoming a Digital Playground contract star, to evolving into one of the most promising new superstarlets of today. Already a Nightmoves Best New Starlet winner, Armani was recently nominated for one of Adult Video News' (http://avnawards.avn.com/) most prestigious awards, their Best New Starlet. A performer who delivers exciting sex scenes, like in the uniformly well received hit Starlets from Elegant Angel; Armani is also a star that cares about the industry that she is a part of. This past Wednesday, Angelina flew to the capitol of California with the Free Speech Coalition (http://www.freespeechcoalition.com/) to take part of their lobbying against mandatory condom use in adult films. The members of the FSC went to speak with legislators about the safety in the adult industry workplace. As a performer, Angelina was able to give a realistic perspective on working on adult entertainment sets that the legislators may have been naive to.

“I was honored to accompany the FSC to Sacramento,” Armani said. “It gave an opportunity to have a performer dispel misconceptions the bill makers at the capitol may have had about our industry. It is of dire importance that performers get involved with what the FSC is trying to accomplish as they are there to protect our right to perform and make adult entertainment. I plan to take part of more of the FSC’s activities in future and encourage my fellow performers to do the same."

“I’m excited about meeting my Houston fans,” Angelina noted. “Everyone at Quest Magazine (the show’s organizers) has been really great and Lone Star Porntuopia is an amazing event to take part of.”

More information about Lone Star Pornutopia III can be found on the show’s official website QuestParty.com. Armani will be on hand to pose for pictures and sign autographs.

Angelina Armani, an 2010 AVN Awards nominee for Best New Starlet who is making a show of support to FSC. Yet another reason why Armani is the perfect choice for the award!