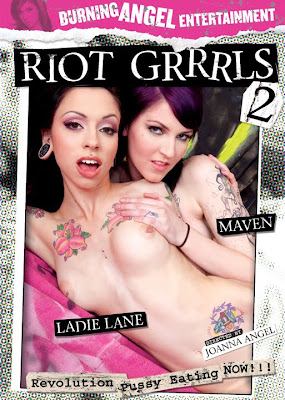 V.I. Lenin famously said, "Sometimes history needs a push," and that's just what Joanna has been doing throughout her career - pushing the boundaries of pornography by creating unique adult films laced with a punk ethos and an irreverent sense of humor. Her movies' refreshingly unique cocktail of sex, rock n' roll, and pop culture have led both fans and critics to dub her "the Queen of Alt-Porn."

And now, adult cinema’s original punk princess has cast her most popular Burning Angel models - and a select handful of mainstream heavy hitters - in a veritable anarchist's cookbook of lesbian desire.

As Joanna says of her company's latest release, "What I particularly like the most about this movie is the cast. When people think ‘girl girl’ movie, they usually think of soft, innocent, girl-next-door type chicks, but this movie is very much the antithesis of that!”

So get ready for the revolutionary rock of Riot Grrrls 2. The revolution may not be televised, but it will be bringing the spirit of lesbian rebellion to stores nationwide June 29, 2010. Distributed exclusively by Vouyer Media.