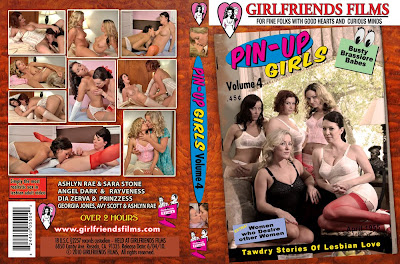 RESEDA, Calif. --- Girlfriends Films is set to release “Pin-Up Girls: Volume 4” on DVD June 15. “Pin-Up Girls: Volume 4” is the newest addition to the acclaimed, vintage erotica series by the leader in lesbian adult movies. Girlfriends Films contract girl Prinzzess returns along with RayVeness, Sara Stone, Ashlyn Rae, Dia Zerva, Avy Scott, Georgia Jones and Angel Dark. The highly successful series chronicles a sultry group of 1950’s girls capitalizing on the demand for risqué photos and movies similar to the work of the legendary Bettie Page. The unique, high-concept series, along with the intricate attention to aesthetic detail and authenticity, has propelled “Pin-Up Girls” to become the strongest selling all-girl series. Moose, Girlfriends Films vice president says, “I can’t plead any modesty when it comes to ‘Pin-Up Girls’. With the countless months we spent researching and developing the series, along with the magnificently talented and beautiful cast, we fully expected ‘Pin-Up Girls’ to be a sensation. Volume three broke every sales record we had, and with its growing fan base, we know 'Pin Up Girls 4' will be even stronger.”
To view the box art, photo stills and trailer for “Pin-Up Girls: Volume 4”, visit
http://www.girlfriendsfilms.com/frame_grabs/pin-up-4/index.html


“If you love stockings, gloves, garters and corsets, you’ll love this raunchy re-look of yesteryear!” writes female reviewer Lil McGill of AIPdaily.com in regards to the “Pin-Up Girls” series. “The music, sets, costumes and scenes are wonderfully put together, and the parings of the girls captures just the right amount of energy…Watching the women dress, undress, and redress is like enjoying a birthday present wrap itself over and over again! What a delicious treat!”

AdultDVDTalk.com presents volumes one and two of “Pin-Up Girls” with a perfect five out of five stars. Critic Jayo writes, “I love it! It’s my favorite of Girlfriends Films’ series, and I’m happy I’m near the beginning of it…’Pin-Up Girls’ is a breath of fresh air. At nearly three hours, it’s actually a refreshing breeze.”


“Pin-Up Girls: Volume 4” adheres to a rigorous commitment to historical accuracy unique to the adult entertainment industry. Through vintage lingerie and realistic sets and props, viewers are transported back to an era of innocence on the cusp of social rebellion. RayVeness’ taboo business venture begins with pin-up photos, but quickly lends itself to producing steamy, lesbian stag films sold in the back of popular “girly magazines”. As the models become increasingly comfortable with each other, they enter into lascivious romances and inadvertently buck the patriarchal ideas characterizing the 1950’s. Social repercussions far from their minds, the girls are more interested in being paid and finally experiencing the type of intense orgasm only another girl can provide.

Adult review site XCritic.com declares “Pin-Up Girls: Volume 1”, “Highly Recommended!” In full agreement, Jack King of PornNewz writes, “Girlfriends Films has ventured out to go spelunking into the caves of period films and successfully completed what other companies cower away from…The amount of time and sheer energy expenditure makes ‘Pin-Up Girls’ the largest undertaking of the best lesbian sex studio out there…Borders on mainstream entertainment with the only reminder that it’s an adult pic when you see these girls go at it to their fullest content. Known for the most realistic lesbian sex in the industry, G.F. Films sheds a glimpse into what might have happened with Lucy and Ethel when Ricardo and Fred were out to work.”