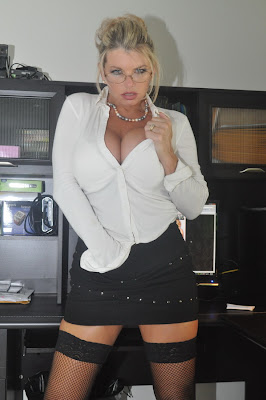 Vicky Vette is quoted as saying: "It has been another amazing year for me personally and professionally. If you would have told me that at age 45 my website network would have grown from 3 to 10 with some of the biggest names in the business, I would have said you were nuts. I was shocked to finish second overall in fan voting for Miss Freeones in April. Just last month I had my first ever adult toy released worldwide by Doc Johnson. I am living proof that anything is possible on the internet and I have much bigger and better 'hush hush' plans for upcoming year. I can say that The Vette Nation Network is expanding - we are covering the world in camo. It would not have been possible to have done anything without the support of the fans - all of whom are keeping an independent network like ours competitive against the Walmart's of porn. I celebrate every year like it is my first.... it is amazing to be around and thriving after seven years in the business!"

To celebrate, Vicky Vette is giving away anyone who joins her flagship website, http://www.vickyathome.com a free VNA tshirt and signed 8x10 as long as they join by Fri, June 18, 2010 (midnight est). To get the freebies, just email Vicky what size shirt you would like right after joining!