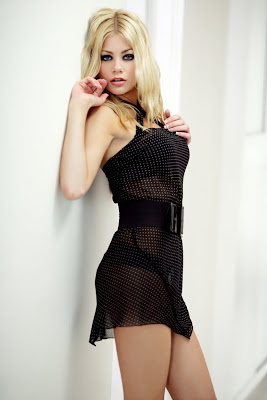 “Having worked with her last year on the show—she was a total pro. Really smart, very beautiful and the kind of girl you can count on,” Fishbein said. “She’s a natural. Even though it’s a TV show it’s a live event for an audience and she matches every quality. And even though she’s young and even though she’s only been in the business a couple years she just has what it takes. And she’s got great screen presence when you see her on film. So I think audiences will love her.”

“I’m ecstatic,” said Steele. “This is huge.” Steele, who launched her career in a memorable way in 2008 when she performed in Digital Playground’s AVN Award-winning epic Pirates II: Stagnetti’s Revenge, is no stranger to the big stage. Some of her recent hits include Riley Steele Strict Machine and Fly Girls. Steele is also coming soon to a theater near you as she’ll make her mainstream feature film debut later this summer in Piranha 3-D.

About AVN Media Network:
AVN Media Network is dedicated to generating customer results through AVN's integrated marketing communications network. In a world that's rapidly changing, we deliver our customers' messages in print, in person, and online. Such integration requires a high degree of interpersonal and cross-functional communication. Our core competency is our ability to develop and integrate customer-focused marketing communications that fit our customers' strategic needs. In such a volatile industry where adult-oriented companies come and go, AVN Media Network has evolved into a media powerhouse. For 25 years, we have published the number one trade publication, AVN Magazine. In addition, we have developed a variety of products designed to infiltrate the niche markets that we service. At AVN Media Network, we instill quality and integrity in everything we do, from the accurate reporting of news to the high quality printing and production of our products. For more information, visit: www.avn.com