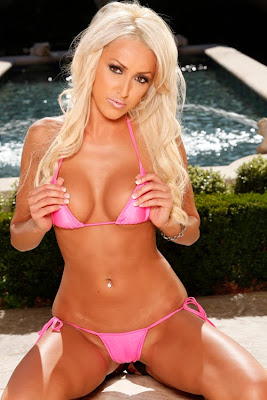 2010 has been a phenomenal year so far for the sultry adult entertainment actress Breanne Benson. The Albanian born beauty kick-started the year with an incredible media impact with her 3D debut. The company Bad Girls in 3D brought Breanne to the third dimension in Breanne Benson: Session 1. Mainstream media and blogs were fascinated by the adult entertainment advancement and Benson was at the forefront. Since then, model-esque beauty has been in high demand from production houses that became enamored by the babe. Videos to feature Breanne have now been hitting the selves of adult DVD retailers and in the last month several to showcase Benson on their box covers have been released.

From Penthouse comes Foot Fantasy Freaks. Directed by Penny Nichols, Foot Fantasy Freaks is a visual heaven for a foot fetishist. The lovely Breanne teases and entices the viewer with her sexy feet and tempts with her delicious toes. In a sex scene that is sure to be remembered during award show season, Breanne is at her most seductive here!

Probably one of the most noteworthy of the group is Naughty America’s First Time's A Charm which sees Breanne’s first released Boy/Girl scene. When Benson first started her adult entertainment career, she started as a Girl/Girl only performer. Naughty America captured Breanne going more hardcore than she had before and presents that first released footage on a must have DVD.

All four of these Breanne-centric DVDs are available now from adult entertainment retailers!