Rock Mondays Present The Official Release Party For It's Big, It's Black, It's Jack #10 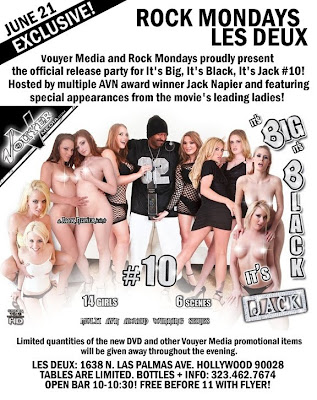 Rock Mondays Present The Official Release Party For It's Big, It's Black, It's Jack #10

The night is being hosted by the charismatic multiple AVN award winning actor/director and will feature special appearances from the movie's luscious leading ladies. Limited quantities of the DVD and other Vouyer Media promotional items will be given away throughout the evening.

A mainstay of TMZ.Com, Les Deux is the infamous A-list hot spot that opens its doors to rock enthusiasts every Monday night. When not checking out the high-voltage sounds inside the club, attendees can head over to the glamorous patio and mingle with the eclectic assortment of adult starlets, guest DJs and Hollywood VIPs who'll be enjoying Vouyer Media trailers and other sexy treats outside.

So whether you're a rocker, raver, lover or sinner, get ready for a night of Hollywood elegance and hardcore decadence, all courtesy of Vouyer Media, Rock Mondays and It's Big It's Black, It's Jack #10.

About It's Big, It's Black, It's Jack #10
One guy. Fourteen girls. Endless possibilities.
Meet Jack Napier. His signature line for Vouyer Media, the It’s Big, It’s Black, It’s Jack franchise, has won the coveted AVN Award for Best Interracial Series for the last two years running. And fresh from those stunning back-to-back victories, this tireless actor/director is ready to score a three-peat with the most ambitious release of his career. It’s Big, It’s Black, It’s Jack #10 is an epic celebration of his tenth year in the business that pairs him up with no less than fourteen of the sexiest young sirens in the game today. This very special release is in stores now.


The biggest innovation here is Jack’s decision to feature two girls in every scene, and it’s a casting choice that’s sure to please even the most demanding interracial fan. Whether you’re into teens, Asians, blondes, brunettes, redheads, big boobs or cougars, you’re sure to find a three-way scenario here that fits your fetish like a hand in a velvet glove. Whatever you want, he’s got.

The two-girl team ups extend all the way to the extras, as the indefatigable Mr. Napier seduces exotic Mina Lee and curvaceous Cylee Cuvee in a heated bonus encounter. All three hours of hot hardcore action were captured in widescreen 16x9 HD, and this ambitious DVD release comes encased in special oversized packaging featuring Jack and the girls.

Sex. Popularity. Awards. When you deal a fast hustle, success is in the cards.