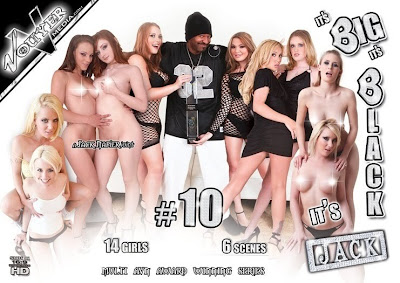 Meet Jack Napier. His signature line for Vouyer Media, the It’s Big, It’s Black, It’s Jack franchise, has won the coveted AVN Award for Best Interracial Series for the last two years running. And fresh from those stunning back-to-back victories, this tireless performer/director is ready to score a three-peat with the most ambitious release of his career. It’s Big, It’s Black, It’s Jack #10 is an epic celebration of his tenth year in the business that pairs him up with no less than fourteen of the sexiest young sirens in the game today. This very special release begins shipping to stores nationwide tomorrow and will go on sale June 16th, 2010.
The biggest innovation here is Jack’s decision to feature two girls in every scene, and it’s a casting choice that’s sure to please even the most demanding interracial fan. Whether you’re into teens, Asians, blondes, brunettes, redheads, big boobs or cougars, you’re sure to find a three-way scenario here that fits your fetish like a hand in a velvet glove. Whatever you want, he’s got.

The two-girl team ups extend all the way to the extras, as the indefatigable Mr. Napier seduces exotic Mina Lee and curvaceous Cylee Cuvee in a heated bonus encounter. All three hours of hot hardcore action were captured in widescreen 16x9 HD, and this ambitious DVD release comes encased in special oversized packaging featuring Jack and the girls.

As part of this extravaganza's marketing roll-out, the release of It's Big, It's Black, It's Jack #10 will be celebrated with an official premiere event June 21st at Hollywood's Les Deux, 1638 North Las Palmas Avenue in Los Angeles, California.

Sex. Popularity. Awards. When you deal a fast hustle, success is in the cards.