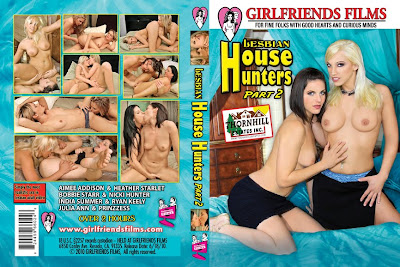 To view the trailer for “House Hunters 2”, visit
http://www.girlfriendsfilms.com/video_clips/index.html

To view the box cover and photo stills from “House Hunters 2”, visit…

Thrilled with the “House Hunters 2” trailer, AIPDaily.com editor-in-chief Christina says, “This movie looks really good. Julia Ann teaming up with Prinzzess is a dream match up, and former Penthouse Pet Ryan Keely and India Summer should heat things up just as much.”

The “House Hunters” series follows a group of real estate agents in the lesbian community of Thornhill. With the decline of the housing market, many of the agents quickly learn they must be ruthless in order to close a deal. Open houses promote open legs, and the clients always end up with a smile on their face. In “House Hunters 2”, the phrase “screwing the competition” takes on a new meaning, as the dresses come off and the bedsprings squeak.

XCritic.com reviewer Apache Warrior lavished praise on the first volume of “House Hunters”. He wrote, “Girlfriends Films has proven once again why their motto is ‘simply the most realistic sex in lesbian adult video.’…Girlfriends Films has hit a winner with their newest series ‘House Hunters’. From start to finish, each scene had it's own unique sensuality to it…I highly recommend this movie!”