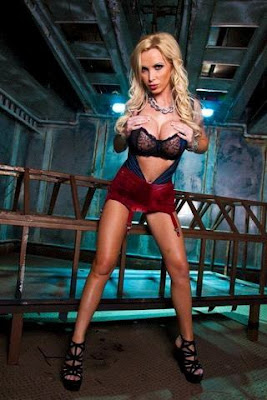 If you have been within an eyeball’s distance of a newsstand in 2010, chances are pretty good you’ve seen adult superstar Nikki Benz on more than one occasion. She is currently on two more major covers worldwide, adding to her impressive total for the year. Her successful run as a cover model has spread beyond the adult industry, allowing her to share her beauty with the mainstream world as well.

The always stunning Nikki is featured on the cover of the brand new issue of UK Men’s World magazine and on the August issue of Genesis magazine in the U.S.

"It's such a great feeling to be going worldwide as a cover model,” Nikki states. “I've been on several magazine covers and layouts from all over the world. Including Australia, Belgium, the UK and of course Canada and the U.S. to name a few."

Fans in Belgium have seen Nikki on the cover of Penthouse as well as enjoying her exquisite form in a multi-page layout. Down under Nikki has been featured as a cover girl on The Picture magazine and in a beautiful layout inside the magazine.

"I love what I do and my hard work is paying off and it's gaining me worldwide recognition as a sex symbol and an adult icon," says Nikki.

Nikki’s biggest magazine coup of the year was her April 2010 Penthouse Pet layout. After being featured on the cover of the May 2008 issue, returning as the Penthouse Pet was a highlight to be sure.

“There are few honors in the adult industry as big as being named Penthouse Pet” says Nikki. “It is something I have wanted for a long time and I am very proud to have earned my key. Plus, the photos came out amazing!”

In addition to her amazing run of magazine covers, Nikki has also been recognized for her live shows. She has been nominated for Adult Movie Entertainer of the Year at the 2010 Adult Nightclub & Exotic Dancer Awards Show. Nikki spends a good deal of her time on the road and has worked hard to provide her fans the best possible shows. "I'm honored to be nominated as 'Feature Performer of the Year',” Nikki adds. “Feature dancing is a huge part of my career and I couldn't be happier!"

A comprehensive account of Nikki’s amazing run in 2010 can be found on wonderful blog created by one of her fans:
http://nikkibenzfanclub.blogspot.com/2010_06_01_archive.html


About Nikki Benz
Arguably the most famous Canadian adult film star ever, Nikki Benz has parlayed her good looks, stunning curves, natural talent, work ethic and keen business sense into a highly successful career. She has starred in over 100 adult films, graced the pages of virtually every men’s magazine on the planet, becoming a Penthouse Cover Girl, April 2010 Penthouse Pet and Hustler Honey. Nikki has achieved crossover success with mainstream projects, including a recurring character on FOXSports.com’s hit web series “Cubed.” Nikki is currently hard at work producing exclusive content for her re-launched web site www.NikkiBenz.com. She also tours the world entertaining her legions of fans with dance engagements and celebrity appearances.