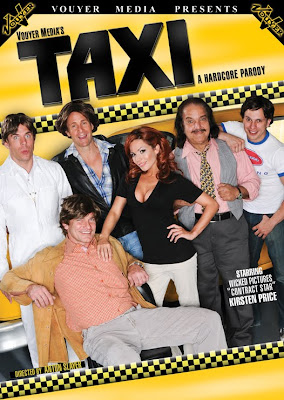 For the project's female lead, Slayer secured the services of Wicked Pictures contract superstar and 2010 AVN Awards Show host Kirsten Price. The vivacious redhead breathes sexy new life into the role of lovelorn Elaine O'Connor Nardos, Louis' not-so-obscure object of desire. It’s a landmark performance that marks the first time one of the iconic Wicked Girls has taken the lead in an outside production.

In addition to Jeremy and Price, Slayer keeps the star power flowing with the likes of Monique Alexander, who shines in a torrid tryst with "Tony Banta" himself, Anthony Rosano.

More sensual highlights come courtesy of busty Vouyer Media favorite Krissy Lynn, who wraps herself around acclaimed industry veteran Evan Stone in a lighthearted romp that’s as sexy as it is funny. Fans of million-watt star power will also enjoy the hardballing performances delivered by such multiple AVN award winners as Eva Angelina and Jenny Hendrix.

The plentiful DVD extras allow the viewer a backstage look at virtually every aspect of the movie’s development, from initial table readings of the script to the final day of location shooting. These extras make it easy to see that the same attention to detail that made Not Really...The Dukes Of Hazzard: A Hardcore Parody a hit with fans and critics alike has been lavished on this new production by the director. "I'm a huge fan of the original series, and I want to do justice to it," Slayer says succinctly. "From the vintage Checker cabs to Louis' caged-in dispatch office, everything that made the original so unique is replicated in this new version."