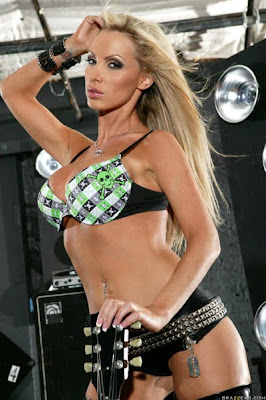 That extra warmth you’re feeling these days might be because the calendar just kicked over to June. But, it might also be because adult entertainment superstar Nikki Benz just dropped one of her hottest scenes ever and is about to embark on sizzling summer tour!

With the release of the highly anticipated “Rocco Ravishes Hollywood”, fans get something they have been waiting a long time to see. Nikki is partnered with adult film legend Rocco Siffredi in a must-see scene. “Ever since I made the announcement on my website, Twitter and Facebook that I shot with Rocco Siffredi, I have been getting non-stop inquiries as to when this scene is going to be released. I'm happy to say that it's finally here!"

As if watching Nikki pair up with one of the biggest stars in adult entertainment wasn’t enough, fans can also see Nikki as she heads out on a three week spectacular summer tour.

Even before she hits the road Nikki will be getting into the spirit of the season with three scorching hot boy/girl scenes. Nikki did some special wardrobe shopping to get the look just right. “I bought some of the sexiest bikinis for my next set of movies,” she adds. “One movie is being shot in Malibu while the other two will be shot in South Beach, I had to look the part.”

The summer feature tour begins in El Paso, TX for a three-day engagement June 10-12 at the Red Parrot. Nikki will take the stage for two shows nightly. “This will be my first time in El Paso” says Nikki. “I know the weather in El Paso is hot, just like my stage shows will be! I'm looking forward to meeting my Texas fans."

After Texas, Nikki heads to Memphis, TN for a five day engagement at Christie’s June 15-19. It will be Nikki’s first time dancing in Memphis and she plans to pull out all of the stops for her Tennessee fans.

With no time to rest, Nikki heads north to Ohio for another five nights at Christie’s in Cleveland June 22 to 26. "Cleveland has always been good to me” says Nikki. “This time around I am going to make sure that my fans get a show they won’t soon forget. This is going to be my hottest and favorite Cleveland appearance to date!"

There will be DVDs, Polaroids, and 8x10 pictures available at each show on Nikki’s tour. After each show on the tour, she will also be featuring her T.I.T.S. (two in the shirt) T-shirts as part of her merchandising sales.

About Nikki Benz
Arguably the most famous Canadian adult film star ever, Nikki Benz has parlayed her good looks, stunning curves, natural talent, work ethic and keen business sense into a highly successful career. She has starred in over 100 adult films, graced the pages of virtually every men’s magazine on the planet, becoming a Penthouse Cover Girl, April 2010 Penthouse Pet and Hustler Honey. Nikki has achieved crossover success with mainstream projects, including a recurring character on FOXSports.com’s hit web series “Cubed.” Nikki is currently hard at work producing exclusive content for her re-launched web site www.NikkiBenz.com. She also tours the world entertaining her legions of fans with dance engagements and celebrity appearances.