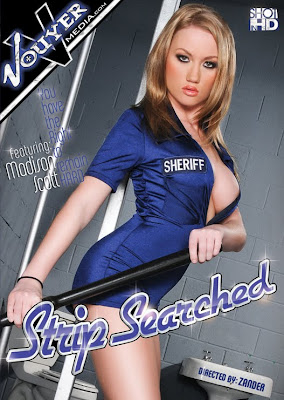 Are You Ready To Do Some Hard Time?
Madison Scott Gets Strip Searched For Vouyer Media


Are you ready to do some hard time? From The Big Doll House to Chained Heat, “babes behind bars” have long ruled the day in mainstream films. But rarely have the twisted sexual exploits that go down inside the greybar hotel been treated with the hardcore panache that 2010 AVN award nominated director Zander brings to the table in Strip Searched.

Strip Searched covergirl Madison Scott exhibits a similar carnal charisma, obviously relishing the opportunity to seduce the camera with her flawless skin and supple breasts before showing off her formidable sex skills in another fit of caged fury.

Nearly three hours in length, the DVD is presented in pristine 16:9 widescreen HD, and it comes wrapped in a striking O-card featuring shapely Madison Scott in what has to be the sexiest sheriff’s uniform in adult movie history.

From baby gangsters to reform school girls, the wild, the willing, and the innocent get rolled up and topped out in Strip Searched.

It’s a naked cage of desire and Vouyer Media is ready to lock your cell and throw away the key. But with cellmates like these, don’t be surprised if you beg for life without parole.