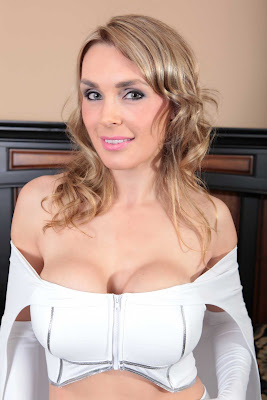 
The British bombshell will also be making an appearance this weekend in Los Angeles this weekend at Adultcon.

Vinyl boots, skin tight catsuits or revealing halter top; these are all articles of clothing you might be use to seeing multi-award winning adult entertainment superstar Tanya Tate (http://www.tanyatate.com) wearing. But with the addition of a flowing cape or prominent logo, Tanya would then be partaking in one of her new found pastimes, cosplay! Cosplay is short for “costume play”, an activity that sees Tanya suited up as one of her favorite superheroes. Whether it’s at the San Diego Comic Con or aiding in the Guinness Book of World Record making Largest Gathering of Superheroes, Tanya has been seen dressed as popular Marvel Comics characters. Now Tanya wants to share her super-heroine exploits with her fans with the launch of JustaLottaTanya.com, a free fansite that indulges in her favorite off-screen activity.

“This is what I do for fun,” Tanya explained. “It’s exciting to dress up as a superhero. It’s playful, fun and I sex up the costume a little. The site came about because all the comic book fans that have seen me in costume tell me I look exactly like characters I dress up as, so I thought I would have a place to share that experience.”

On JustaLottaTanya.com there are images, video and commentary on her costumes, the events she has worn them to and much more. With already dozens of photos and many more more to come, this is a site that fans of comic books and the sexy seductresses will enjoy. Comic books sites like GirlsGoneComic.com, BleedingCool.com, CosmicBookNews.com and BamKapow.com have already taken a shine to Tanya and have splashed her picture up. But it’s not just genre websites you can see Tanya on, other places to see the sexy star range from Life.com and GettyImages.com to OCRegister.com, KTLA.com and DailyMail.co.uk.

Presented here are links to some of those site:

While she won’t be in costume, Tanya will be making an appearance this weekend in Los Angeles at the Adultcon convention. March 25th - 27th, fans will be lining up to meet Tanya Tate at the Los Angeles Convention Center as she makes her first signing appearance since winning a pair of SHAFTA Awards in London earlier this month. Tanya will have some of her hottest DVDs available for purchase including the recent release from Naughty America simply titled Tanya Tate. Tanya Tate collects five of Tanya’s hottest sex scenes on one incredible disc. Tanya will also have new 8x10s and other memorabilia on hand at the show. More information about Tanya’s Adultcon appearance can be found on the Adultcon website: http://www.adultcon.com. Venture to the Adultcon show and get a naughty picture with the multi-award winning U.K. Superstar.

You don’t have to look up in the sky to see a superhero, just log on to JustaLottaTanya.com! See what adult entertainment superstar Tanya Tate is doing when she isn’t dominating the screen with scorching hot sex! You can also meet her this weekend at Adultcon in Los Angeles!

Tanya Tate Movies and Video On Demand from Gamelink