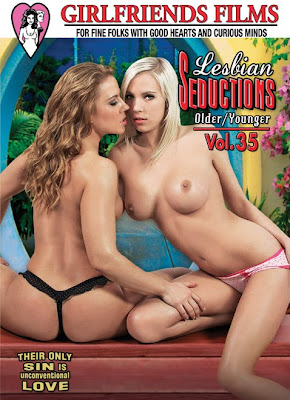 “Lesbian Seductions Older / Younger: Volume 35” from Girlfriends Films is available to own on DVD March 29. Volume 35 features one of the hottest Girlfriends Films box covers of the year, as former AVN Performer of the Year Inari Vachs seduces busty, blonde newcomer Britney Beth. Gracing the Girlfriends Films cover is part of the amazing comeback by the sultry star. The amazing cast of the movie also includes Asa Akira, Magdalene St. Michaels, Melissa Monet, Sarah Shevon, Persia Monir and Sophie Dee. Girlfriends Films Vice President Moose says, “We’ve always admired Inari’s beauty, so when she announced her comeback to adult entertainment, we knew we had to cast her. Inari is a natural seductress and is perfectly suited for our ‘Lesbian Seductions’ series. Between her, the rest of the sexy cast and the amazing series, we know volume 35 will sell extremely well.”

The first sexy scene in “Lesbian Seductions 35” begins when Asian sexpot Asa inquires about renting a room in Melissa’s house. Asa is overwhelmed by the beauty of the house and yard and is willing to give Melissa anything she wants. In the next vignette, Persia finds herself attracted to her friend’s daughter, Sarah. Persia lays her cards on the table and then lays Sarah down on the bed. Scene three features a nude Prinzzess yelling at Britney for staring at her in the locker room after softball practice. When Coach Inari finds out about Britney’s sexual curiosity, she decides to give the young blonde something to really lust after. In the forth and final hot scene, Sophie’s power goes out on a cold night, allowing Magdalene to help warm up the busty girl.

In his review of volume 33, Apache Warrior of XCritic.com wrote, “This film receives high marks for its very high replay value and hotness factor for its captivating scenes… this film deserves it's highly recommended rating. Overall, this movie delivers to the viewer the highly sensual lovemaking that this studio is known for.”