DIGITAL PLAYGROUND’S “TOP GUNS” COMES IN FOR A LANDING WORLDWIDE 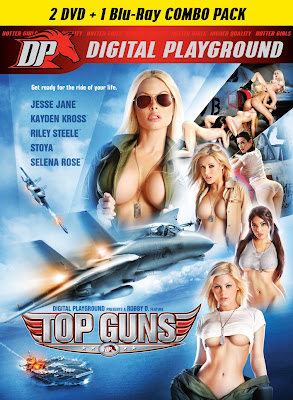 DIGITAL PLAYGROUND’S “TOP GUNS” COMES IN FOR A LANDING WORLDWIDE

Blockbuster Movie Expected to Soar to Number One

Even before “Top Guns” was officially released today, the pre-sale orders have been off the charts, “The pre-orders for ‘Top Guns’ are the largest we’ve had for any title this year,” says Colin of Adult DVD Empire. Peggy Mac, Digital Playground’s Vice President of Sales agrees, “Everybody wants to see this movie! We’re almost out of our second pressing and have already started on our third.”

Kayden Kross™, who plays Jesse’s arch-rival in the movie, says her sex scene in the locker room with Scott Nails is one of the hottest she’s ever shot, “I don’t know what happened to us, but we were all over each other! Maybe it was the uniforms, or the jets. I’m not sure -- but we were crazy fired up.”

“Top Guns” is award-winning director Robby D.’s biggest budget feature to date, “I knew when we were shooting this movie that it was going to be huge. And the post-production special effects are sick.”

“I’m really proud of Robby D. and all the Digital Playground contract girls for putting out an exceptional movie,” says DP founder Joone. “Top Guns’ is top notch and we’re excited to share it with the world.”

The movie also stars Riley Steele™, Stoya™ and Selena Rose™. A special site has been set up at www.topgunsxxx.com where fans can download the trailer and view exclusive cast photos. The site is optimized for iPhone and iPad users.

There is also a YouTube version of the trailer: http://www.youtube.com/watch?v=6MnZ31VxOS0 The 2 DVD + 1 Blu-Ray Combo Pack includes a behind the scenes featurette, photo gallery, deleted scenes, bonus sex scene, bloopers and more.