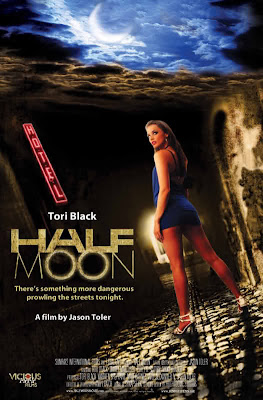 In "Half Moon," adult film super star Tori Black (Making her mainstream debut) plays Rose, a down-on-her-luck prostitute who takes a mysterious, high-paying job with a very strange client. Rose has her misgivings, but just as she begins to relax, her client reveals a terrifying and deadly secret. "Half Moon" sinks its fangs into you and will not let you go until its bloody, hair-raising climax. Marek Matousek and Torey D. Sutton also star alongside adult performers Nicki Hunter and Jack Lawrence.

"It's a good popcorn movie," says the beaming Toler. "This is the first of many for me." On working with his gorgeous star, the AVN Female Performer of the Year of 2010, he says, "We were very fortunate to have Tori come on board. It's a strong performance. She really understood the balance of the role."

Bloggers and critics alike are also howling the movie's praises:

"'Half Moon' blew me away! Writer/Director Jason Toler did a marvelous job. Stellar performances by both Black and Matousek." - Micro-Shock.com

"The camera loves her [Ms. Black], and you simply cannot take your eyes off of her." - Horrortalk.com

Breaking Glass Pictures CEO Richard Wolff has gone on record for "Half Moon" as well. "We are proud to distribute 'Half Moon.' Sales have been amazing so far. Tori Black gives an amazing performance, and we look forward to Jason Toler's next project."

"I hope the audience enjoyed it," says Toler, who now looks forward to several new projects.

"Half Moon" debuts on DVD and VOD March 8 and can be ordered online on www.breakingglasspictures.com or www.amazon.com