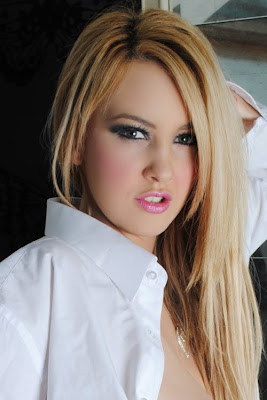 The sexy siren will also be making an appearance at the annual SHAFTA Awards show!

What’s the sexiest thing about British babe Katie K (http://katiekofficial.com/)? While this stunning 22 year old has a lot of alluring attributes, one thing Americans can’t seem to get enough of is her seductive accent. Now that arousing voice can be heard live once a week on The Katie K Show! Katie K now has a radio show and she wants you to get dirty with her. This naughty seductress is now on RedTubeRadio.com weekly and is ready to unleash her inner X-rated thoughts.

“I want you to call me!” exclaimed Katie. “We are going to do some very hot, dirty, nasty things on the show and I know people will have fun with me!”

Katie is live every Sunday night from 9pm to 10pm (PST). People in the U.S. can chat with Katie by calling toll-free 866.292.9684. The show can also be heard on demand at any time. The first episode is now available on RedTubeRadio.com.

Katie has just announced that she will also be making an appearance at the annual SHAFTA Awards (http://www.televisionx.com/shafta/) this week in London. There, she will act as one of the night’s presenters giving out one of SHAFTA’s top awards; Female Performer of the Year! Katie will be presenting with popular DJ and host of the MTV’s U.K. version of Pimp My Ride, Tim Westwood. The SHAFTA Awards will take place in London on February 9th. The show will be broadcast live on Television X. “I love the SHAFTAs and can’t wait the be there!” said Katie. “To present a major award like Female Performer of the Year, is huge. I’m honored and excited.”

Katie K wants to talk to you! Call in to her radio show this Sunday night and talk to the Bad Girl of Britain!