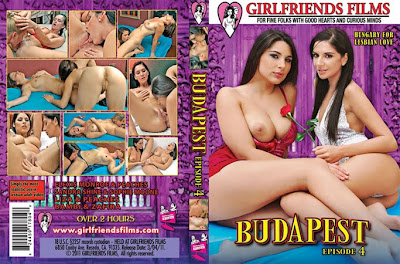 “Budapest: Episode 4” releases from Girlfriends Films on DVD today. The acclaimed series is filmed entirely in and around Budapest, Hungary, a city known to possess some of the most beautiful women in the world, like adult entertainment star Peaches. Episode 4 exclusively features Peaches’ final on-camera sex scenes. American star Elexis Monroe is the source of Peaches’ sexual satisfaction in her farewell performance. Liza is also paired with her Hungarian compatriot for some wild action. Additionally, “Budapest 4” features Sandra Shine, Sophie Moone, Zafira and Bambi. XCritic.com highly recommends the previous volume of “Budapest” to its readers. Reviewer Apache Warrior writes, “This third installment is by far the best episode of this series. Each duo deserves to be filmed again in other Girlfriends Films titles. I was amazed by the kissing performances in the first three scenes and how personal the lovemaking felt towards the viewer. All three sexual situations will be replayed many times over. It was so good that the audience will want to jump in and join them. Fans of hot kissing and sensual lovemaking scenes will need to see ‘Budapest 3’. I highly recommend this movie.”

In the “Budapest” series, American Elexis Monroe travels to Budapest to write an article on the 1956 Hungarian Revolution. Elexis stays with magazine editor Sandra Shine, who introduces her to Hungary’s exquisite culture and ravishing women. Caught up in the beauty of the city, Elexis finds herself the target of some scheming lesbian predators. “Budapest” introduces viewers to the must-see sights of one of the most famous cities in the world—sights on the street and in the bedroom. Episode 4 features passionate pairings between Elexis Monroe and Peaches, Liza and Peaches, Sandra Shine and Sophie Moone, and Zafira and Bambi.

Elexis Monroe says, “I can’t believe my sex scene in ‘Budapest 4’ was Peaches’ last sex scene on camera ever! Fans have been requesting to see us together for years, and Girlfriends Films made it happen. It was amazing! Thanks!”

“Budapest” has received a lot of notoriety for introducing viewers to exotic locations and even more exotic women. AVN Media founder Paul Fishbein gave “Budapest 1” four and a half stars. He wrote, “Nice to see the top lesbian company go on vacation and come back with four hot lesbian sex scenes. Some well-shot footage from the streets of Budapest augments another sultry all-girl entry.”