Nikki Benz Kicks Off 2010 With AEE, Cover of Club Magazine 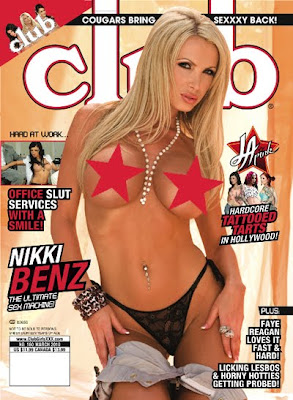 Nikki Benz Kicks Off 2010 With AEE, Cover of Club Magazine

( LAS VEGAS, NV ) - With barely enough time to recover from a busy holiday season, adult entertainment superstar Nikki Benz is already ramping up her schedule to make 2010 her best year ever. As she joins the rest of the adult film industry in Las Vegas for the Adult Entertainment Expo, Nikki can also be seen on the cover and the pages of the current issue of Club Magazine.

She will also be attending the 2010 AVN Awards Show on January 9th. This year Nikki has been nominated for Best All-Girl Three-Way Scene for the movie “Slave for a Night” from Penthouse/Pulse.

Fans who are unable to make it to Las Vegas to see Nikki in the flesh (and even those who can) can see her in all of her glory in the March issue of Club Magazine. Nikki is both cover girl and centerfold for the issue with shots from the one and only Holly Randall.

"It was an honor to once again shoot with Holly Randall. That has to be one of my all time favorite layouts that Holly has shot of me. I encourage all of my fans to go and pick up a copy of my Club Magazine cover and the next time I'm feature dancing in your town, bring it in and I'll sign it. I was so excited to be on the cover of Club Magazine that I had to see the layout for myself as soon as possible. It's pretty damn hot!"

The March issue of Club Magazine is available and on stands now.

Nikki’s Signing schedule for AEE trade show is as follows.