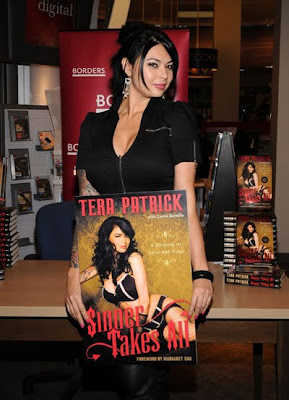 The most recent stop on Tera’s tour had her attending the Adult Entertainment Expo in Las Vegas for book signings and a fantastic book release party.

“The fans for the AEE are always great,” said Tera. “They have supported me throughout my career as an adult entertainer and their feedback about the book has been fantastic!”

Less then a week later she heads back to Atlanta, where Tera will take a few nights to get up close and personal with her fans. She takes the stage at the Pink Pony for a spectacular opening night megashow January 26 at 11pm. The world’s number one adult entertainer is only in town for three nights, so fans are invited to come out early so as not to miss Tera.

“I have been so busy promoting 'Sinner Takes All,'” says Tera. “It will be a lot of fun to hit the stage and put on a great live show for the fans.”

Following her stops in Atlanta , Tera Patrick will embark on a DJ tour in support of “Sinner Takes All.”