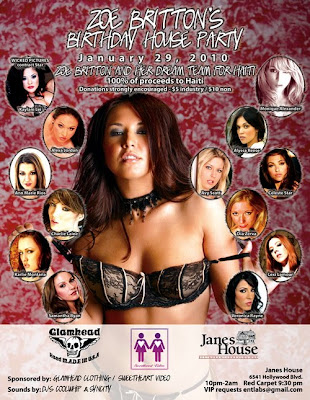 Adult glamour model Zoe Britton (http://www.zoebritton.com/) will be celebrating her birthday this year with a conscientious twist, by raising donations for Haiti relief. As most are aware, Haiti was recently rocked by a series of devastating earthquakes which have left thousands dead and some of its cities in ruin. The need for support is dire and imperative. Instead of a usual party, Zoe has asked some of her adult star friends to lend their name to this event, which sees 100% of the door proceeds going to Haiti relief.

Sponsoring the event are Glamhead Clothing (http://www.mosquitohead.com/) and Sweetheart Video (http://www.sweetheartvideo.com/), with The Star Factory (http://thestarfactoryent.com/) sponsoring the red carpet.

More information can be found on the event’s Facebook page, which also has an option to donate via Paypal: http://www.facebook.com/event.php?eid=264170650788&ref=ts


Zoe Britton celebrates her birthday with a charitable style! Join the brunette beauty for a night of revelry with some of today’s hottest adult stars and aid in a worthy cause!