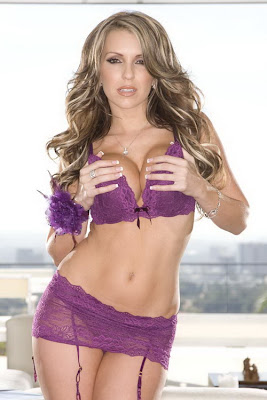 (Las Vegas, NV) Courtney Cummz (http://www.courtneycummz.com/ ) – She is one of the most hardcore performers/directors in the adult entertainment industry! Winner of several awards including multi-Performer of the Year accolades, Courtney has made a mark on porn. The West Virginia native began a run in 2004 and quickly established herself as a gonzo girl who loved extreme erotica. Adult company Zero Tolerance saw the rising superstar and placed her under contract where Cummz flourished. Courtney made a move into directing, which provided the opportunity to bring her sexual visions to the screen. Some of Courtney’s lines included the well-received Courtney’s Pussycats and Face Invaders. In wanting to expand her horizons Cummz is now under a non-exclusive contract with Zero Tolerance and is shooting with some of the other big names in the industry.

The mainstream media loves Cummz as the blonde beauty has been seen on shows like Fox News Channel's "Red Eye" and even made cameos on television shows like CBS’ The Unit. Recently Cummz once again found herself in the spotlight just by attending a Bill Simmons’ book signing. Sports press across the globe picked up on the story of the sex pot innocently showing her respect for Simmons. Courtney is now branching out even more and will soon be teaming up with hip clothing company T.I.T.S. to be featured on one of their upcoming T-shirts. There is no stopping the prolific Cummz as she looks to make 2010 her best ever year in Adult!

Saturday
HotMovies from 11AM to noon
Stripperforme.com from noon to 3PM
TITS from 3PM to 6PM

Sunday
HotMovies from 11AM to noon
Stripperforme.com from noon to 4PM