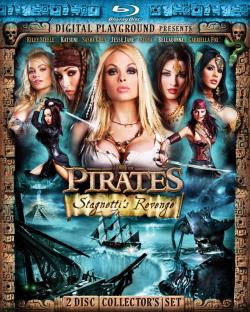 January 5, 2010 --- VAN NUYS, Calif. --- Digital Playground announced the launch of a stylish and exclusive novelty toy line that features the largest adult blockbusters of all time, Pirates and Pirates II: Stagnetti's Revenge. The world leader in adult entertainment is expanding its brand presence by creating a highly anticipated adult novelty line designed to compliment the blockbusters. Farley Cahen, VP of Novelty Development, “Joone wanted a novelty line that delivered on the same promise as the Pirates movies. We went through hundreds of designs and developed new technologies before we where happy.”

Digital Playground spent over a year researching, developing and designing to bring consumers a line of novelties unparalleled to any other in the industry. The initial launch for the Pirates themed line features 22 SKU’s designed with unique character and individual personalities that enhance the star characters of each of the two films. This novelty line is guaranteed to please customers through its sex appeal and functionality.

“As we forge into the New Year with an exciting and unique product, our reputation and success of the Pirates films not only bring strong credibility to the masses, but a substantial base of loyal fans. Viewers who know and love the films can now take home their own collection and experience a higher level of pleasure,” Joone, Founder of Digital Playground stated.

Joel Kaminsky of Good Vibrations stores previewed the line and said, "Once again, Digital Playground hit it out of the park. After seeing the line in Berlin it was evident that quality was the #1 priority.”

The most important aspect of the Pirate novelty line is the pure pleasure they deliver. The stimulating and tasteful designs promote comfort and pleasure, while increasing a consumers level of satisfaction. The playful line features some of the most beautiful stars of the adult industry: Jesse Jane, Riley Steele, Katsuni, Stoya and Janine.


Digital Playground conducted focus group testing with over 50 participants. All of which responded with extremely positive feedback. “Ultra quiet, super-powered motors were manufactured to optimize stimulation while reducing distraction,” Cahen said. “Every aspect of the cutting edge designs, to highest quality materials and the unique packaging were carefully considered in an effort to create a branded line that consumers would be attracted to and retailers could profit from.”

“East Coast News is extremely excited to be carrying the brand new line of adult toys that Digital Playground has mastered,” Brian Herbstman of East Coast News said. “The DP label has long been a successful DVD brand for our sister company IVD, and we're confident the company's innovative, stylish, and visually stunning novelty line will be a big seller for ECN as well. We can't wait to tell our customers about the new products from DP -- they're going to love them!"

The Pirates line is slated to launch January of 2010 exclusively to select retailers and online sites. Soon fans will be able to locate a local distributor/retailer directly from www.digitalplayground.com.

Interested buyers can meet with Farley Cahen at booth 7001 during AEE\
About Digital Playground:
Digital Playground is the world leader in adult filmmaking and interactive formats boasting the largest HD library available. Since the Company’s inception in 1993, Digital Playground has earned over 300 awards, currently garners more than 80% of high definition sales within the adult market, and is a leading provider of Blu-ray™ titles, with over 25% of the market. Female owned and operated, Digital Playground emphasizes quality first, employing fastidiously high production values in erotic film for women, men and couples. Digital Playground’s commitment to excellence, innovative technology, brilliant full-length productions and exclusive Contract Stars are the secrets to its success and makes Digital Playground the most highly demanded supplier of content for hotel, IPTV, cable, pay-per-view and mobile networks worldwide. For more information, visit www.digitalplayground.com, www.myspace.com/digitalplayground, or www.twitter.com/dpxxx.