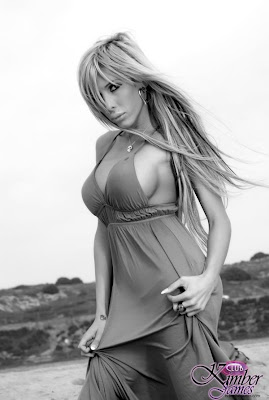 
2010 starts off with a bang for sexy superstar of adult films, Kimber James (http://ts-kimberjames.com/). The 32DDD beauty landed a major victory at the 27th annual AVN awards by winning the Transsexual Performer of the Year award. This is the first AVN Award Kimber has won and the Miami native could not be any happier:


The prolific star rocked the red carpet of the awards as press from all over the world could not get enough of the sex star. Pictures of Kimber on the carpet have appeared on Life.com, VillageVoice.com and of course AVN.com. “The exposure from the award show is spectacular. To see myself on all these news sites and blogs is thrilling,” Kimber noted. Even more photos of Kimber can be found on GettyImages.com and WireImages.com


Hot on the heels of Kimber’s latest successful DVD Transsexual SuperStars - Club Kimber James v1, comes another DVD to star the buxom blonde, USA T-Girls. On January 19th, SMC Productions unleashes a new DVD that, once again, features James in a scorching hot sex scene. Distributed by Pulse, USA T-Girls is sure to be another hit for Kimber. The following week Transsexual Babysitters Vol. 11 debuts on DVD. On January 25th, Devil’s Films debuts the eleventh installment in their successful series. Once again, Kimber James is the DVD cover girl. All three titles can be found at adult video retailers.


Kimber James is making some major moves in 2010! From a Transsexual Performer of the Year win at the AVN awards to major press coverage of her on the red carpet to two new DVDs to debut in the next two weeks, she is unstoppable. This year is going to be the year of James!