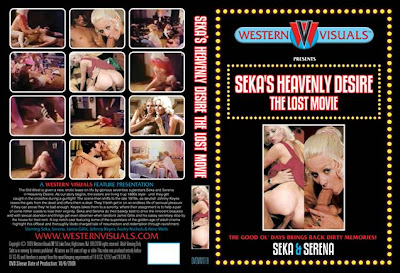 The feature (yes – a porn movie with a long script, and real acting!) begins in the 1870s in California’s Wild West, where prostitute Mary Lou and her friend Rosebud are accidentally gunned down after witnessing the death of Mary Lou's dim-witted lover Ralph (in a shoot-em-up duel, of course!). One century later, the Devil (Johnny Keyes) recruits the souls of Mary Lou (Seka) and Rosebud (Serena) to return to their brothel, now the site of a Los Angeles sorority house, to try to bring two newcomers into the fold! Mary Lou and Rosebud are offered an endless life of sensual pleasure if they can prove they're bad enough; that’s when virgins Ellen and Sue are slowly coaxed into losing their virginity to their boyfriends in order for them to gain access into ‘Swinging Hell.’

Says the still-sexy Seka: "This was one of the many times I worked with Serena, and all I can say is WHOOPIE… What a RIDE!!!!!"

Check out all the titles at Vantage Distribution’s web site: visit http://v9catalog.com,