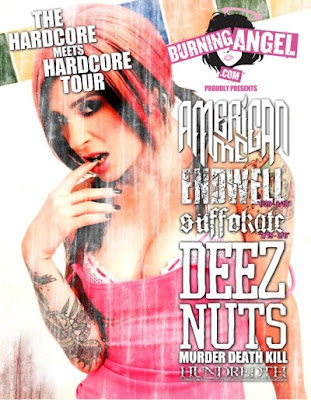 And as always with Joanna, no small amount of mainstream media revelry is accompanying the release of the project. Beginning this Friday, January 29th, Burning Angel is a proud sponsor of THE HARDCORE MEETS HARDCORE TOUR, featuring bands from Rise Records and Mediaskare Records.

As Joanna reveals, "You know, since we're, like, 'hardcore,' we had to get involved with these guys. It just wouldn't be hardcore enough without Burning Angel! From January 29th through March 6th, the Hardcore Meets Hardcore Tour will be bombarding cities around the country, so check the schedule at Burning Angel.Com to see if they're gonna be near you! If you're lucky, maybe you'll run into a Burning Angel or two at the show! Don't miss your chance to see some great bands all at once!"

Fans coming to this Friday's show at Southern California's Cobalt Cafe (22047 Sherman Way in Canoga Park) will be lucky indeed, as the night will be hosted by the "Princess of Alt-Porn" herself.

And she couldn't have picked a better DVD to release in time for the show. FRIENDS DON'T LET FRIENDS FUCK ALONE 2 strikes gold right from the opener, as she and JAMES DEEN get the ball rolling with a three-way featuring 21 year old VIOLET MONROE that's made memorable by wonderful dirty talk and an abundance of splayed-pussy close-ups. The action gets even more heated when 2010 AVN Best Actor nominee SEAN MICHAELS jumps into the mix to make this a four-way that even features some DP action.

Joanna returns for the next segment, a torrid lesbian liaison featuring SKIN and bawdy British lass HOLLY D. This encounter features enough pussy-intensive action to please die-hard sapphic aficionados, as each girl takes a turn dominating the other two during the action.

In the spirit of saving the best for last, in-demand woodman MR. PETE throws down with Burning Angel favorites JESSIE LEE and MISTI DAWN for an explosive triad that brings the show to a righteous conclusion.

While this alt-porn spectacular delivers all the wry humor that Burning Angel fans have come to expect and demand, Joanna is quick to point out that FRIENDS DON'T LET FRIENDS FUCK ALONE 2 definitely turns the heat up to 10.

"The group sex scenes in this movie all really stand out for me. After all, friends are pretty awesome. They pick you up when you are down, they buy you birthday presents, and they eat your pussy while you're getting fucked. These scenes will teach you the true meaning of friendship - friends don't let friends fuck alone!"