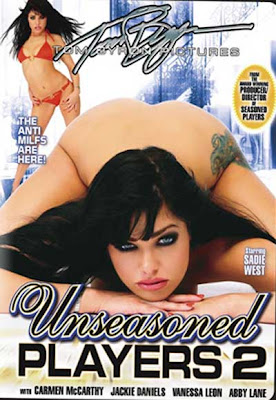 The anti-MILFs of Unseasoned Players 2 get down-and-dirty and just as raunchy as adult actresses that have ‘been in the biz’ for decades!

The Unseasoned Players line the latest series from widely-successful Tom Byron Pictures; and, this second installment streets this week (Thursday, January 21st) though Evolution Distribution (www.evolutiondist.com). Featuring Sadie West, Jackie Daniels, Abby Lane, Carmen McCarthy and Vanessa Leon, UP2 showcases the ‘special’ talents these newbies have! Each of these hotties have been adult performers for less than two years, but you’d never know (they may be inexperienced on camera, but not in hardcore f**king!).

In fact, Ms. Lane has only been in the adult realm for a whopping three weeks! Lucky for Tom, though, he gets his second joy ride with Carmen (they previously shot a BJ scene, “the last time I couldn’t hold back!”), and Sean Michaels calls cover-girl West “acrobatic” (this is definitely no virgin here!). Jackie Daniels tells fans – and an eager Nick Manning – that she can’t wait to get started in her pre-scene interview: “I’m gonna love on you and f**k the sh*t out of you.” For this Unseasoned Player, “it’s been a busy year. I like (porn) a lot – lotsa sex boys!” Plus, after Vanessa Leon and Tommy do the nasty, the director extraordinaire tells the brunette bombshell, “Wow, did that feel good!”