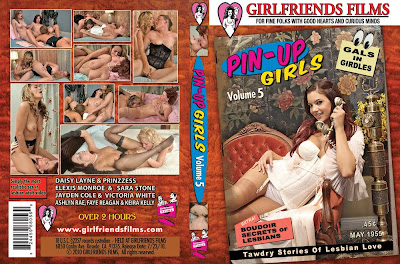 Girlfriends Films will release “Pin-Up Girls: Volume 5” on DVD today. New stars and even sexier vintage lingerie makes the fifth volume a must-have addition to the series. The addition of fan favorites Elexis Monroe and Jayden Cole to an amazing cast including Girlfriends Films’ exclusive contract star Prinzzess, along with RayVeness, Faye Reagan, Sara Stone, Daisy Layne, Victoria White, Ashlyn Rae and Keira Kelly, positions “Pin-Up Girls 5” to dominate the charts upon release. “The most innovative production ever from Girlfriends Films,” writes XCritic.com reviewer Apache Warrior about the series. “Everything is genuine, authentic, and natural. In less than six months, ‘Pin-Up Girls’ has become this studio's most popular product…This series, along with a solid supporting cast and the authentic 1950's attire, has captured the essence of that time period and the sexual nature of the pin-up model. Moreover, the natural bodies of the women also give ‘Pin-Up Girls’ an aura of respectability that other adult productions lack because of the dread of potential lower sales. Girlfriends Films stuck to its guns and thus, are reaping the rewards.”


The highly successful series chronicles a sultry group of 1950’s girls capitalizing on the demand for risqué photos and movies similar to the work of the legendary Bettie Page. The unique, high-concept series, along with the intricate attention to aesthetic detail and authenticity, has propelled “Pin-Up Girls” to become the strongest selling all-girl series. “Pin-Up Girls: Volume 5” returns Prinzzess, RayVeness and Sara Stone, but also introduces some new, sexy faces. Prinzzess has her way with Daisy Layne, while busty Sara Stone introduces Elexis Monroe to the pin-up girl lifestyle. Recent Girlfriends Films’ performer Jayden Cole receives help removing her lingerie from Victoria White, while Ashlyn Rae takes on both Faye Reagan and Keira Kelly.


“If you love stockings, gloves, garters and corsets, you’ll love this raunchy re-look of yesteryear!” writes female reviewer Lil McGill of AIPdaily.com in regards to the “Pin-Up Girls” series. “The music, sets, costumes and scenes are wonderfully put together, and the parings of the girls captures just the right amount of energy…Watching the women dress, undress, and redress is like enjoying a birthday present wrap itself over and over again! What a delicious treat!”

Moose, Girlfriends Films’ Vice President says, “Stars around the industry are hearing how much fun everyone has on a ‘Pin-Up Girls’ set and are calling us to be a part of the series. The gorgeous, authentic lingerie really makes the performers feel sexy, which translates into hotter performances. Volume five showcases some great, new additions to the series.”


“Pin-Up Girls: Volume 5” adheres to a rigorous commitment to historical accuracy unique to the adult entertainment industry. Through vintage lingerie and realistic sets and props, viewers are transported back to an era of innocence on the cusp of social rebellion. RayVeness’ taboo business venture begins with pin-up photos, but quickly lends itself to producing steamy, lesbian stag films sold in the back of popular “girly magazines”. As the models become increasingly comfortable with each other, they enter into lascivious romances and inadvertently buck the patriarchal ideas characterizing the 1950’s. Social repercussions far from their minds, the girls are more interested in being paid and finally experiencing the type of intense orgasm only another girl can provide.