Who is Lupe Fuentes 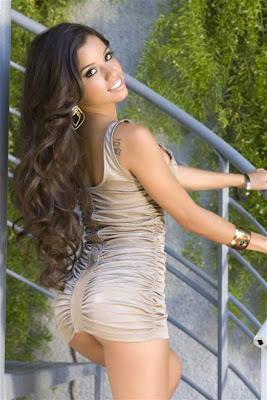 The Owner and President of Lupe Fuentes Productions and Wicked Pictures Contract Star, this 4’9” Latina dyna mo is a classically trained ballerina, competed in synchronized swimming and studied a plethora of styles of dance while growing up in Madrid, Spain. Lupe has always had a deep appreciation of the human form. She began her mo deling and acting career simultaneously in high school and became an instant success landing placements in Spanish teen fashion campaigns, Billboards and pop culture magazines, and Spanish mainstream film, resulting in the “Lupe Fuentes Phenomenon” with her secret desire to show the world her body. The adult publications soon reached out to her and she responded immediately, leading the foray into the adult entertainment side of the industry. Lupe can be seen on the upcoming cover of American Curves Magazine, distributed nationwide in Wal-Mart and newsstands everywhere. Check out Lupe’s blog at lupeblog.com and check out her column “Ask Lupe” at Com plex.com. Lupe has already made 2 incredible appearances on the nationally acclaimed Howard Stern Radio Show on XM/Sirius Radio, was named Model of the Month at RapIndustry.com for the mo nth of June, and was also named Miss XFANZ Summer 2010. The contest was held at the Hard Rock Hotel in Las Vegas , Nevada , during the 2010 XFANZ Expo, where she was also awarded Latina Star of the Year. In an exclusive arrangement with Wicked Pictures, the sensual adult performer and mainstream crossover personality will be starring in four mo vies over the next twelve mo nths is joining the ranks of the company’s award-winning Wicked Girls. Now, the fans have spoken, giving Lupe the Favorite New Starlet Award at the 2010 F.A.M.E Awards, held in Los Angeles.

For mo re information on Lupe Fuentes, please visit: http://www.ilovelupe.com/ or http://www.lupelive.com/.