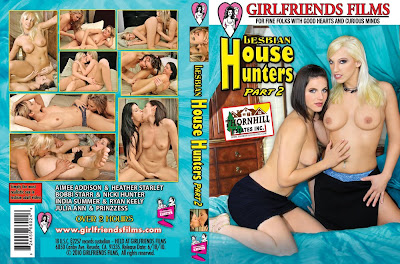 
June 29, 2010 --- RESEDA, Calif. --- On June 29, Girlfriends Films releases the “House Hunters 2” DVD. The June 3 trailer release of the “House Hunters 2” trailer has media, retailers and consumers ripe with anticipation for the DVD. The all-star cast makes it easy to see what all the excitement is about. “House Hunters 2” features Girlfriends Films contract stars Prinzzess and India Summer alongside Bobbi Starr, Nicki Hunter, Julia Ann, Heather Starlet, Ryan Keely and Aimee Addison. AIPDaily.com editor-in-chief Christina says, “This movie looks really good. Julia Ann teaming up with Prinzzess is a dream match up, and former Penthouse Pet Ryan Keely and India Summer should heat things up just as much.”


The “House Hunters” series follows a group of real estate agents in the lesbian community of Thornhill. With the decline of the housing market, many of the agents quickly learn they must be ruthless in order to close a deal. Open houses promote open legs, and the clients always end up with a smile on their face. The steamy scenes include Aimee Addison seducing Heather Starlet, Prinzzess playing power games with Julia Ann, India Summer and Ryan Keely exploring their sweet spots, and Bobbi Starr and Nicki Hunter driving each other wild. In “House Hunters 2”, the phrase “screwing the competition” takes on a new meaning, as the dresses come off and the bedsprings squeak.


Girlfriends Films vice president Moose says, “I was blown away by the response the ‘House Hunters 2’ trailer invoked. The cast is definitely one of our finest, including a hot mix of top name cougar and cub performers. They all do an amazing job embodying the competitive nature of the characters, which really brings a new level of intensity and passion to the sex. Consumers are in store for something truly special.”


XCritic.com reviewer Apache Warrior lavished praise on the first volume of “House Hunters”. He wrote, “Girlfriends Films has proven once again why their motto is ‘simply the most realistic sex in lesbian adult video.’…Girlfriends Films has hit a winner with their newest series ‘House Hunters’. From start to finish, each scene had it's own unique sensuality to it…I highly recommend this movie!”