Aurora Snow Will Act Like A 'Monkey' At the Palms 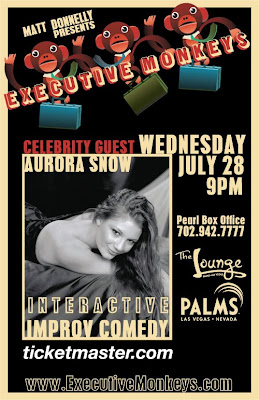 Aurora Snow Will Act Like A 'Monkey' At the Palms


Fresh from three hectic days on the floor of the San Diego Comic-Con, adult entertainment superstar Aurora Snow will try her hand at improv comedy.

Aurora will appear as a special celebrity guest on the Executive Monkeys Interactive Improv Comedy Show Wednesday July 28th at The Lounge inside The Palms in Las Vegas.

“I am really excited by this opportunity,” says Aurora. “The show is unique, fast-paced and I can’t wait to put my improv skills to the test!”


Aurora Snow is one of adult films leading ladies. Using her unique combination of girl-next-door looks and explosive sexual energy she has delighted fans and critics alike in over 400 films to date. Her efforts have earned her numerous awards including AVN’s Performer of the Year in 2003. She has made cameo appearances in such mainstream films as “Superbad” and continues to work on camera in both adult and mainstream. Aurora has recently been featured in her own autobiographical graphic novel from Carnal Comics and has her own skateboard through Pornstar Skateboards. Currently Aurora is working on her web site www.AuroraSnow.com where she produces exclusive content to delight her many fans. She has also recently begun work on a book project to be released in 2010.