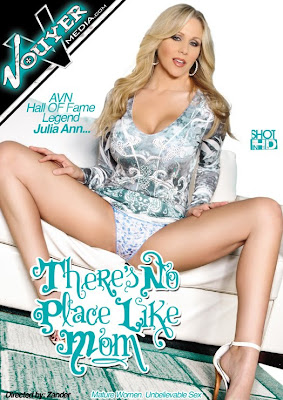 Vouyer Media is pleased to present There’s No Place Like Mom, the all-new M.I.L.F. series that blows the lid off the sex lives of the finest mature women in adult entertainment. The first installment in this new franchise arrives in stores nationwide July 28th, 2010.

AVN Hall Of Fame beauty Julia Ann graces both the movie’s cover and one of its finest sequences, oozing sex appeal and personality to spare throughout. She lets the director’s camera explore every inch of her luscious body before throwing down a scalding screw with Anthony Rosano. This scene has everything – it’s extreme, there’s great chemistry, and the energy level is high throughout.

From there, the action gets even more intense, with crossover sensation and Howard Stern regular Tabitha Stevens going down slow in a lengthy sex session that exudes an almost palpable sense of passion.

Busty brunette Rayveness makes her triumphant return to Vouyer Media in the follow-up, and this blistering segment sets the stage for equally hot encounters featuring seasoned players like Persia Pele and Totally Tabitha. These ladies take on some of the most reliable studs in the game, including Mark Wood, Marco Banderas Johnny Sins and Sascha.

The DVD is rounded out with a plethora of sexy bonus materials, including an epic one girl, five-guy bonus scene. And like all Vouyer Media releases, the show was shot and edited in 16:9 widescreen HD and features Stroke Selection, revealing behind-the-scenes footage, trailers, and a hot hardcore still gallery.

With a cast of industry legends, high production values, and three hours of M.I.L.F.-tastic action, Zander's There’s No Place Like Mom is a white-hot start for this exciting new series.

And it's arriving in stores everywhere July 28th, 2010, exclusively from Vouyer Media.