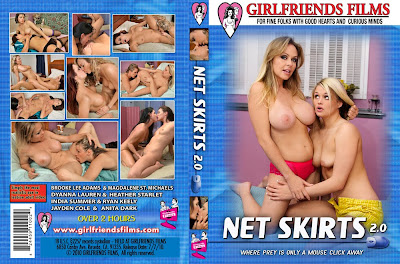 On July 13, Girlfriends Films released “NetSkirts 2.0” on DVD, the anticipated second volume of the new, hit series. Featuring Girlfriends Films’ contract performer India Summer, plus Dyanna Lauren, Heather Starlet, Jayden Cole, Ryan Keely, Brooke Lee Adams, Magdalene St. Michaels and Anita Dark, “NetSkirts 2.0” packs twice the star power and twice the passion of the acclaimed first volume. Social networking site NetSkirts.com begins as a way for female owned businesses in Thornhill to market their services directly to consumers. However, the site quickly turns into the perfect online playground for horny cougars to prey on innocent cubs. After screening the previous installment, AIPDaily.com Editor-in-Chief Christina writes, “Romantic and sensual…This series has a lot of potential…The sex shown in these films is pretty accurate to what [my girlfriend] and I do so I find them very hot and sensual…I really enjoyed the opening movie in this series!”
To view the “NetSkirts 2.0” trailer, cover and photo stills, visit http://www.girlfriendsfilms.com/frame_grabs/netskirts2/index.html

Equally impressed with “NetSkirts 1.0”, XCritic.com reviewer Apache Warrior writes, “Some memorable sexual spark…This series will be a very successful one like many of [Girlfriends Films’] others…Sweet and genuine.”

In “NetSkirts 2.0”, the women of Thornhill begin to fully utilize the seductive powers of social networking. Dyanna Lauren finds new college student Heather Starlet on NetSkirts.com and offers her a place to stay. However, monthly rent includes properly servicing the landlady. Anita Dark discovers the profile of sexually confused Jayden Cole and befriends her. After becoming turned on from a lesbian adult movie, Anita is the first person Jayden calls for some experimenting of her own. Reprising their romance from the first volume, Brooke Lee Adams and Magdalene St. Michaels are now a serious couple, making love in the most intimate of ways. Meanwhile, horny India Summer cruises the Internet looking for easy prey. In order to momentarily spare the innocent target of India’s fixation, Ryan Keely offers to distract India for a while up in the bedroom.

“Due to continued demand, we’ve already had to re-replicate ‘NetSkirts 1.0’ on DVD,” states Moose, Girlfriends Films’ Vice President. “The successful positioning of the series created a whirlwind of orders prior to the release, and I know retailers are going to experience an even greater influx of consumers for each subsequent volume. ‘NetSkirts 2.0’ begins to explore the motives behind online dating, from hot affairs to passionate relationships. This provides a great array of sexual energy in the scenes to entice all types of viewers.”