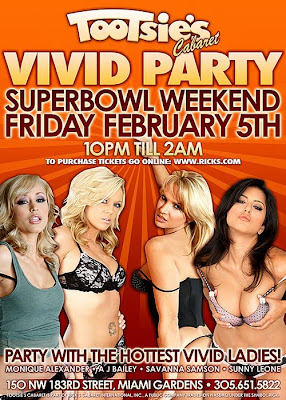 February may be the shortest month of the year, but that won’t keep adult entertainment superstar Sunny Leone from packing her calendar with appearances, photo sessions and a shooting schedule that includes her most ambitious project to date.

This month is packed with plenty of new projects including the launch of SunLust Pictures new web store, www.SunLustproducts.com. The new store is the place for DVDs, magazines, collectibles and all things related to Sunny Leone and SunLust Pictures.

Sunny’s busy February kicked off on February 3rd when she joined rock legend Dave Navarro on his radio show on www.spreadradiolive.com.

“Dave and I have a great rapport,” says Sunny. “This was the first time I have been on his show, but we get along very well. The conversation flows so naturally. So much has happened since the last time we spoke. I couldn't wait to catch, Dave and his listeners, up on all of the amazing things going on in my life and career.”

Sunny’s busy month continues when she heads down to Miami for Super Bowl Weekend. She will be enjoying the incredible nightlife including a fantastic event at Tootsies Cabaret in Miami. Sunny will join other Vivid hotties Savanna Samson, AJ Bailey and Monique Alexander on Friday February 5th from 10pm to 2am for the hottest party in the city.

Heading home, Sunny will appear on Playboy Radio’s Night Calls with Christy Canyon and Nicki Hunter on February 8th at 4:30pm. Among the topics being discussed will be Sunny’s huge hosting gig two nights later. On February 10th, she will host the 2010 XBiz Awards in Hollywood.

“It is a great honor to be hosting the XBiz Awards,” Sunny states. “It is going to be a spectacular celebration of the very best our industry has to offer. We have some sexy surprises in store for everyone in attendance to make sure it will be a night to remember.”

It will also be a busy month shooting for Sunny both behind the camera and in front of it. SunLust Pictures will shoot a half dozen new productions including two new volumes of “Pussy Eating Club” and a special all-girl movie that features Sunny in all six scenes.

Then from February 18-20 Sunny will shoot her most ambitious project to date. “Gia” is the stranger-than-fiction story of the biggest star in the history of adult films. It features cameos from living legends and luminaries from the industry.

“We are really proud of Gia,” gushes Sunny. “It is a great movie with a fantastic cast. At SunLust Pictures we always want to challenge ourselves. Gia is something new for us and I think the fans will love the results.”

With so much on her plate for February Sunny may need a few days off to recover, but she will be right back at it with an already busy month scheduled for March.

Lastly Sunny is partaking in FreeOnes.com's Miss FreeOne's Contest. It allows fans to vote everyday for their favorite model or adult film star and if they register they have a chance to win a trip to L.A. for the awards party! http://www.missfreeones.com/biography_Sunny_Leone.html