Evan Stone Electrifies the Stage at the 2010 AVN Adult Entertainment Expo, & Is Now Off to XBiz 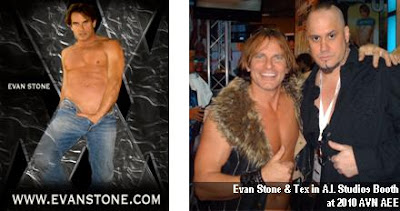 Evan Stone Electrifies the Stage at the 2010 AVN Adult Entertainment Expo, & Is Now Off to XBiz

(Las Vegas, NV) The New Year kicked off with a big bang Jan. 7th - 10th in Las Vegas when the 2010 AVN Adult Entertainment Expo (AEE) brought out the biggest & the brightest stars all under one roof. And the best & brightest male star, the indomitable Mr. Evan Stone, hosted the show as the MC of the AEE's stage throughout the entire Expo. From the moment the AEE kicked-off, to its closing hours, attendees kept coming back for more as Evan commanded the stage with his uniquely entertaining & enticing style. Flocking the space daily, fans hungrily waited for Evan to pose for photos when he was off-stage, and to sign autographs in the A.I. Studios booth. Morning, noon & night the energetic celebrity kept the party rolling, constantly attracting all eyes his direction with his comedic sketches & animated antics. And each evening Evan captivated the crowds at night clubs throughout Sin City, with quite possibly his most memorable evening appearance being at the 27th Annual AVN Award Show where, after riling up the crowd, he joined Joanna Angel on stage to present the award for "Female Performer of the Year".

"2010 is going to be one of the best yet! Hopes are up & profits are back on the rise," exclaimed Evan, in between sets at the 2010 AEE Stage. "Producers of events & content are shifting paradigms to reach out & really connect with the fans. And that's what I'm all about - connecting with the fans."

And the award-winning Evan Stone certainly will have many opportunities to connect with his fans on Feb. 10th at the 2010 XBIZ Awards, held in conjunction with the XBIZ LA Conference (www.XBizAwards.com). In addition to Evan's appearance at the 2010 XBIZ Awards, where he has been asked to take the stage once again to present an award, he has received three prestigious nominations, including "Male Performer of the Year" & the first ever "People's Choice Award" powered by XFANZ.com. However, it's his nomination for "Acting Performance of the Year - Male" for his outstanding acting talents in "This Ain't Star Trek" (Hustler Video) which is perhaps the most timely, since Evan is currently working on the sequel to the very popular & successful film.

"Having Evan Stone reprise his role as Captain Kirk was an even more memorable experience than the first time around. Here's a guy who's not only by far the best actor and the best performer in the Adult industry, but also an incredibly helpful presence on the set," explained the award winning Director, Axel Braun. "Evan's input was instrumental in many areas of this production, from choreographing the fight scenes to coaching other actors, to even helping PM the show...and in his spare time, he managed to deliver an award-worthy sex scene with Kimberly Kane. There's a reason why he's so successful...he just deserves it."