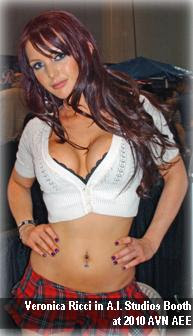 Tantalizing Starlet, Veronica Ricci, Captivates Fans At The
2010 AVN Show, & Is Now Off to the Penthouse® Magazine SuperParty

(Las Vegas, NV) Fashion Model & Skyrocketing Starlet, Veronica Ricci, has an energetic lifestyle. Ever since photos of the gorgeous college co-ed graced the covers & centerfolds of many popular magazines, including Hustler ® & Penthouse®, Veronica's fans have gone wild with delight. But, as runner-up winner for the title of 2010 Penthouse PetTM of the Year, Veronica has little (if any) time to meet & greet fans. So, when the 22 year old announced she would be at the 2010 AVN Adult Entertainment Expo (AEE) a few weeks ago, she made a BIG splash at her first personal appearance in a fan-focused public event. Signing autographs & representing her sponsors in the A.I. Studios booth kept Veronica Ricci running in high-gear, as her feverish admirers lined up for the rare opportunity to meet the young celebrity. Enthusiastic crowds clamored for a picture with, or a glimpse of, the alluring Veronica, who's been in the spotlight recently on TV & radio shows nationwide. And it's her army of adoring fans that proves the saying true talent will always be in demand!

"We are VERY honored & excited to have a celebrity such as Veronica Ricci signed with our team," discussed Dave Phoenixxx, President of A.I. Studios. "From hosting the official after-party, to red carpet photo ops, she simply radiates with a unique mix of natural allure & shy subtlety. She is simply angelic. Veronica truly is a rising star who is sure to make waves in the entertainment industry!"

Fans can mix & mingle with Veronica, & her Penthouse® friends at the Penthouse® Magazine SuperParty (www.ThePenthouseSuperParty.com) set for this Saturday, February 6th, in the Passion Nightclub in Hollywood, FL. During the SuperParty Veronica will be given her brand new signature key-shaped diamond necklace presented to her by Marc Bell, CEO of Penthouse® Media Group.

"I'm thrilled & honored to be a member of the Penthouse family, everyone's so wonderful! And I'm really excited about the new developments for 2010," Veronica said with a giddy exuberance. "This week I'm in Florida for the SuperParty, & then it's off to LA for the XBiz Award Show & red carpet. After that some quality time with my friends online, & video games. Lock & load your weapons, I'm deadly!"