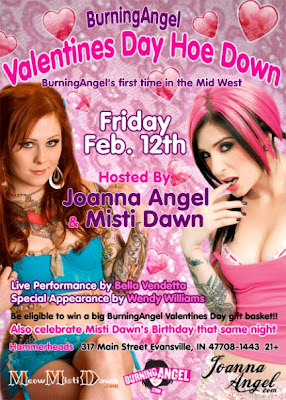 (FEBRUARY 11, 2010 ROADS TO MOSCOW) - With two new Burning Angel DVDs (Friends Don't Let Friends Fuck Alone 2 and P.O.V. Punx 3) in release from Vouyer Media, and a new website (http://www.meowmistidawn.com/) going live, it should come as no surprise that Joanna Angel and Misti Dawn are in celebratory moods. And celebrating is exactly what they'll be doing Friday night, February 12th, when they unleash Burning Angel's first Midwest event, The Valentine's Day Hoe Down at Hammerheads (317 Main Street) in Evansville, Illinois.

For the low cover charge of only $5.00 per person, fans will have the opportunity to not only spend the evening with the stars of these two AVN award nominated franchises, but also, in the words of Misti herself, enjoy a night of "polesque, burlesque, and typical Burning Angel antics." Bella Vendetta, another star from Friends Don't Let Friends Fuck Alone 2, will also be performing and hosting during the evening, which will kick off at 10:00pm.

In addition to rejoicing in the success of the new Burning Angel titles in release from Vouyer Media, the night will also see the girls commemorating the launch of www.meomistidawn.com, Burning Angel's first venture into marketing a solo girl site since the creation of Joanna's flagship site. As if that weren't enough, Misti will also be celebrating her birthday during the evening.

It all amounts to what the buxom Ms. Dawn suspects will be a memorable evening. "This is the first time Joanna has ever performed or done any appearances in the Midwest so it should be huge. I've had people from as far away as Canada asking for the closest airport so that they can fly in. Since all Burning Angel shows are typically only coastal, this is going to be a fun venture for us."