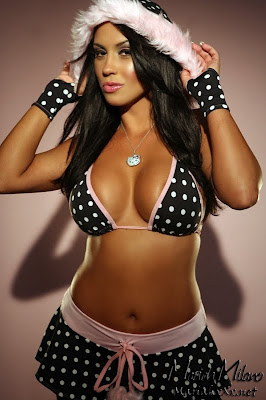 MARIAH MILANO Heats Up Spain With European Hip-Hop Star, Monseigneur Mike!
Mariah Milano (http://mariahxxx.net/) is an adult star who always wants to experience new things, in both her sex life and in her career. In keeping with those ideals, this rising star has headed to Europe to broaden her horizons. The Sicilian beauty is currently shooting in Barcelona, Spain for hip hop superstar Monseigneur Mike. Monseigneur Mike is the top selling rapper/hip hop star in France and has been signed with Universal Music France since 2005. This is his first time venturing into the adult world and he is very excited about his project and working with Milano.

“I am producing and directing along with another name director. I will be doing two songs for the project and have personally selected every girl in the movie. I wanted exotic and sensual performances. I am a fan of Mariah’s and thought I would take a shot at bringing her over to Spain to be involved. She is a huge star in America and has many fans in Europe so this will be a great honor to have her here and to have her name along with us.” Monseigneur Mike went on to say that the project is the first of many for him and the next project will surely be shot in his home city of Paris and will also include Mariah. “I am very confident that we can brand this new type of rap infused porn into a successful series of films and I want Mariah’s name to be on every one of them.”

The project is being shot in 3D HD for Blu Ray and the budget has already exceeded 300,000 Euro. Production begins on February 8 with Mariah’s first scene will consist of following her around Barcelona for a day and end with her at the sea with both a male and female co-star for the first sex scene of the film. Mariah will be appearing in a total of two sex scenes, as well as the music videos for the songs in the video.

“I am so excited to visit Spain!” Mariah exclaimed about this breakthrough experience. “I have been getting emails and MySpace messages from fans in Spain that I never knew I had. It’s so strange to think that what I do would be so worldwide. I am so excited I can’t stand it!”

The film, which also stars European stars Dunia Montenegro from Spain and Tina Canelle from France, will be submitted to Cannes where Mariah will be to do the press for it and attend the viewing at the festival.