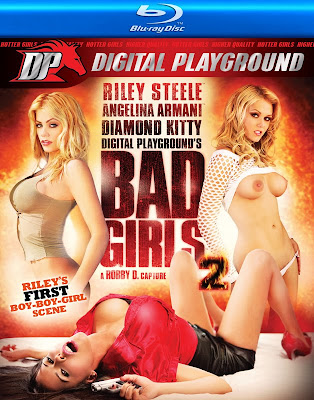 November 20, 2009 --- VAN NUYS, Calif. --- Riley Steele™ and Angelina Armani star in “Digital Playground’s Bad Girls 2”, releasing on DVD and Blu-ray™ Disc from Digital Playground on November 24. The hot new movie from director Robby D. introduces Riley Steele’s first boy / boy / girl threesome sex scene. Always up to no good with their scandalous ways, Riley and Angelina are joined by Diamond Kitty, Nicole Ray and Mina Leigh. Everybody knows that bad girls have more fun, and the Digital Playground girls are the baddest on the block. Digital Playground’s founder Joone says, “The ‘Bad Girls’ series shows off just how kinky and sinful our contract girls can be. It’s almost like we’ve found their evil twins who will do anything. Sweet Riley Steele loses her inhibitions and goes wild in this movie.”

Riley Steele says, “I have never felt more satisfied than having two cocks to play with and fill me up at the same time. It was enough to make me wish every movie was a ‘Bad Girls’ movie. I can’t wait to see what freaky things I get to do in the next one.”


About Digital Playground:
Digital Playground is the world leader in adult filmmaking and interactive formats boasting the largest HD library available. Since the Company’s inception in 1993, Digital Playground has earned over 300 awards, currently garners more than 80% of high definition sales within the adult market, and is a leading provider of Blu-ray™ titles, with over 25% of the market. Female owned and operated, Digital Playground emphasizes quality first, employing fastidiously high production values in erotic film for women, men and couples. Digital Playground’s commitment to excellence, innovative technology, brilliant full-length productions and exclusive Contract Stars are the secrets to its success and makes Digital Playground the most highly demanded supplier of content for hotel, IPTV, cable, pay-per-view and mobile networks worldwide. For more information visit www.digitalplayground.com , www.myspace.com/digitalplayground , or www.twitter.com/dpxxx