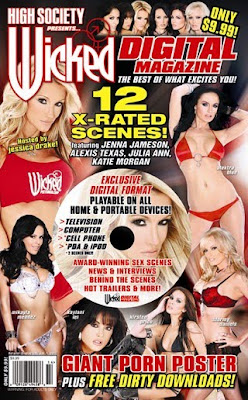 LOS ANGELES, CA - (NOVEMBER 18, 2009 ROADS TO MOSCOW) - Head East. It's more than the name of the classic rockers who created the FM radio staple "Never Been Any Reason" back in the day. It's also the new manifesto of Wicked contract superstars Stormy Daniels, jessica drake, and Alektra Blue, who are fleeing from the warm and sunny climes of Southern California to bring their signature heat to a series of feature dance engagements in New York, Louisiana and Illinois. And while this torrid trio trips the light fantastique, Kirsten Price will be treating her online fans to a special, one-night only live webcast at www.wicked.com.

Recent NightMoves Adult Entertainment Awards winner Stormy's sojourn will take her all the way back to her home town of Baton Rouge, Louisiana, where she'll be performing next week from the 23rd to the 28th at the famed Gold Club Cabaret, located at 4622 Bennington Avenue. To confirm show times, call 225-923-0123.

Fellow NightMoves winner jessica will be bringing her practical magic to New York November 19th to the 21st, where she'll be treating fans to several shows at "the Long Island area's only four-star nightclub," the Cafe Royale, located at 101 Route 109 East in Farmingdale. To learn more about this exciting engagement, contact the venue at 631-777-7870 for details.


Fresh off a successful weekend store signing in Orange County, lovely Alektra is traveling deep into the heart of the nation for a series of weekend shows (November 19th-21st) at Washington Park Illinois' Hustler Club, located at 5420 Bunkum Road. For details, call the club directly at 618-874-9334.

From Farmingdale to the frontiers of the Internet, it looks like Head East was really on to something back in the day, because it's true - as Fall breaks and we head back into Winter, there's "never been any reason" to pass up a chance to bask in the warming, million-watt glow of a Wicked Girl.