Anton Slayer Wraps THE DUKES OF HAZZARD, A HARDCORE PARODY 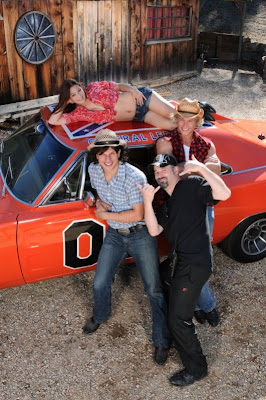 Starring four-time AVN award nominee Ryder as the iconic Daisy, the production found curvaceous Ms. Texas tackling the role of Kandy. Anthony Rosano and Bill Bailey headlined as the titular "Dukes," two residents of fictional Hazzard County who rule the road in their tricked-out muscle car the "General Lee," while blonde beauties Monique and Shawna rounded out the principal cast as Lulu and Nancy Lou.

Replete with everything from Daisy's iconic shorts to rustic locations that paid homage to the classic TV show, the production found Slayer deftly navigating his way through Vouyer Media's most elaborate effort to date, carefully bringing the project in on-time and on-budget, even in the face of such potential obstacles as the first major storm to hit Los Angeles County in nearly half a year.

"I am amazed by what Anton was able to create given the budgets we're allotted in Adult," observes publicist Daniel M of the production. "Even with a storm and the other potential hardships you confront when shooting in the country, he never compromised his vision or the integrity of the production." Fans are invited to visit Vouyer Media's official YouTube channel (www.youtube.com/vouyermedia ) in the days and weeks ahead to see brief interview clips with the cast and crew.

THE DUKES OF HAZZARD: A HARDCORE PARODY has all the elements to become one of next year's most talked about adult satires. Discover the fun for yourself when it ships to retailers nationwide January 26th, 2010.